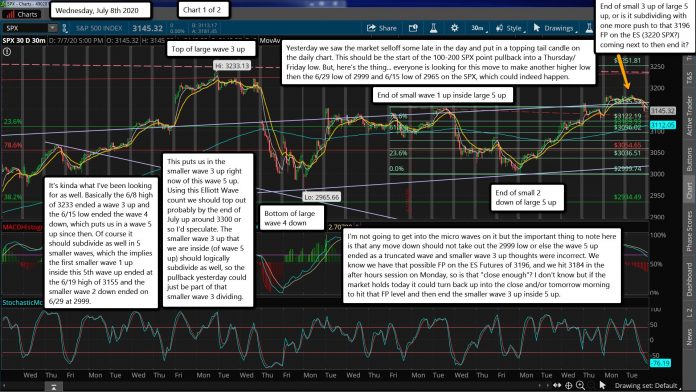 Yesterday we saw the market selloff some late in the day and put in a topping tail candle on the daily chart. This should be the start of the 100-200 SPX point pullback into a Thursday/Friday low. But, here's the thing... everyone is looking for this move to make another higher low then the 6/29 low of 2999 and 6/15 low of 2965 on the SPX, which could indeed happen.

This puts us in the smaller wave 3 up right now of this wave 5 up. Using this Elliott Wave count we should top out probably by the end of July up around 3300 or so I'd speculate. The smaller wave 3 up that we are inside (of wave 5 up) should logically subdivide as well, so the pullback yesterday could just be part of that smaller wave 3 dividing.

I'm not going to get into the micro waves on it but the important thing to note here is that any move down should not take out the 2999 low or else the wave 5 up ended as a truncated wave and smaller wave 3 up thoughts were incorrect. We know we have that possible FP on the ES Futures of 3196, and we hit 3184 in the after hours session on Monday, so is that "close enough"? I don't know but if the market holds today it could turn back up into the close and/or tomorrow morning to hit that FP level and then end the smaller wave 3 up inside 5 up. 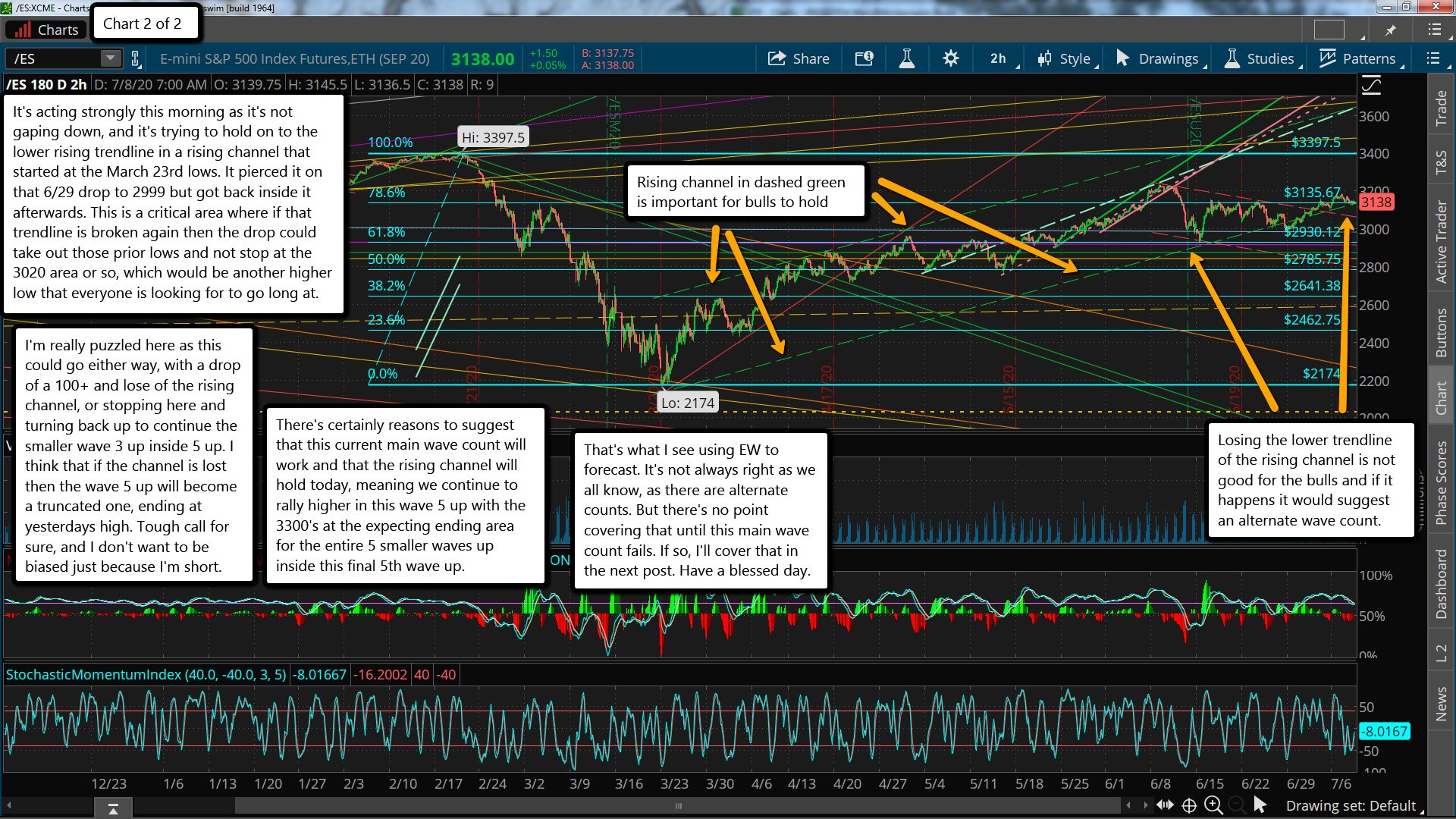 It's acting strongly this morning as it's not gaping down, and it's trying to hold on to the lower rising trendline in a rising channel that started at the March 23rd lows. It pierced it on that 6/29 drop to 2999 but got back inside it afterwards. This is a critical area where if that trendline is broken again then the drop could take out those prior lows and not stop at the 3020 area or so, which would be another higher low that everyone is looking for to go long at.

I'm really puzzled here as this could go either way, with a drop of a 100+ and lose of the rising channel, or stopping here and turning back up to continue the smaller wave 3 up inside 5 up. I think that if the channel is lost then the wave 5 up will become a truncated one, ending at yesterdays high. Tough call for sure, and I don't want to be biased just because I'm short.

There's certainly reasons to suggest that this current main wave count will work and that the rising channel will hold today, meaning we continue to rally higher in this wave 5 up with the 3300's at the expecting ending area for the entire 5 smaller waves up inside this final 5th wave up.

That's what I see using EW to forecast. It's not always right as we all know, as there are alternate counts. But there's no point covering that until this main wave count fails. If so, I'll cover that in the next post. Have a blessed day.