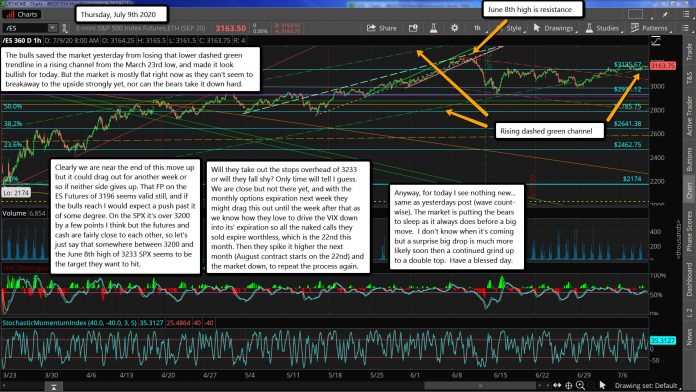 The bulls saved the market yesterday from losing that lower dashed green trendline in a rising channel from the March 23rd low, and made it look bullish for today. But the market is mostly flat right now as they can't seem to breakaway to the upside strongly yet, nor can the bears take it down hard.

Clearly we are near the end of this move up but it could drag out for another week or so if neither side gives up. That FP on the ES Futures of 3196 seems valid still, and if the bulls reach I would expect a push past it of some degree. On the SPX it's over 3200 by a few points I think but the futures and cash are fairly close to each other, so let's just say that somewhere between 3200 and the June 8th high of 3233 SPX seems to be the target they want to hit.

Will they take out the stops overhead of 3233 or will they fall shy? Only time will tell I guess. We are close but not there yet, and with the monthly options expiration next week they might drag this out until the week after that as we know how they love to drive the VIX down into its' expiration so all the naked calls they sold expire worthless, which is the 22nd this month. Then they spike it higher the next month (August contract starts on the 22nd) and the market down, to repeat the process again.

Anyway, for today I see nothing new... same as yesterdays post (wave count-wise). The market is putting the bears to sleep as it always does before a big move.  I don't know when it's coming but a surprise big drop is much more likely soon then a continued grind up to a double top.  Have a blessed day.