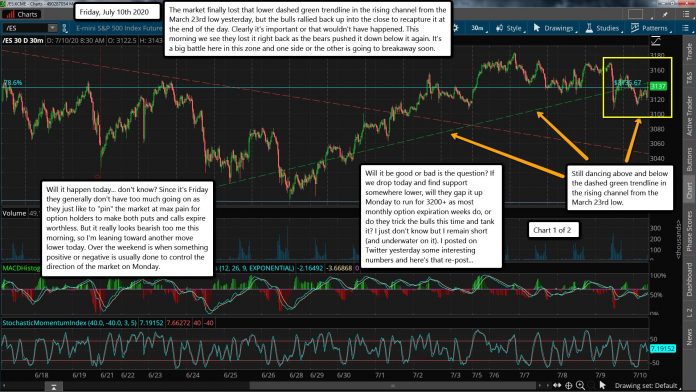 The market finally lost that lower dashed green trendline in the rising channel from the March 23rd low yesterday, but the bulls rallied back up into the close to recapture it at the end of the day. Clearly it's important or that wouldn't have happened. This morning we see they lost it right back as the bears pushed it down below it again. It's a big battle here in this zone and one side or the other is going to breakaway soon.

Will it happen today... don't know? Since it's Friday they generally don't have too much going on as they just like to "pin" the market at max pain for option holders to make both puts and calls expire worthless. But it really looks bearish too me this morning, so I'm leaning toward another move lower today. Over the weekend is when something positive or negative is usually done to control the direction of the market on Monday.

Will it be good or bad is the question? If we drop today and find support somewhere lower, will they gap it up Monday to run for 3200+ as most monthly option expiration weeks do, or do they trick the bulls this time and tank it? I just don't know but I remain short (and underwater on it). I posted on Twitter yesterday some interesting numbers and here's that re-post... 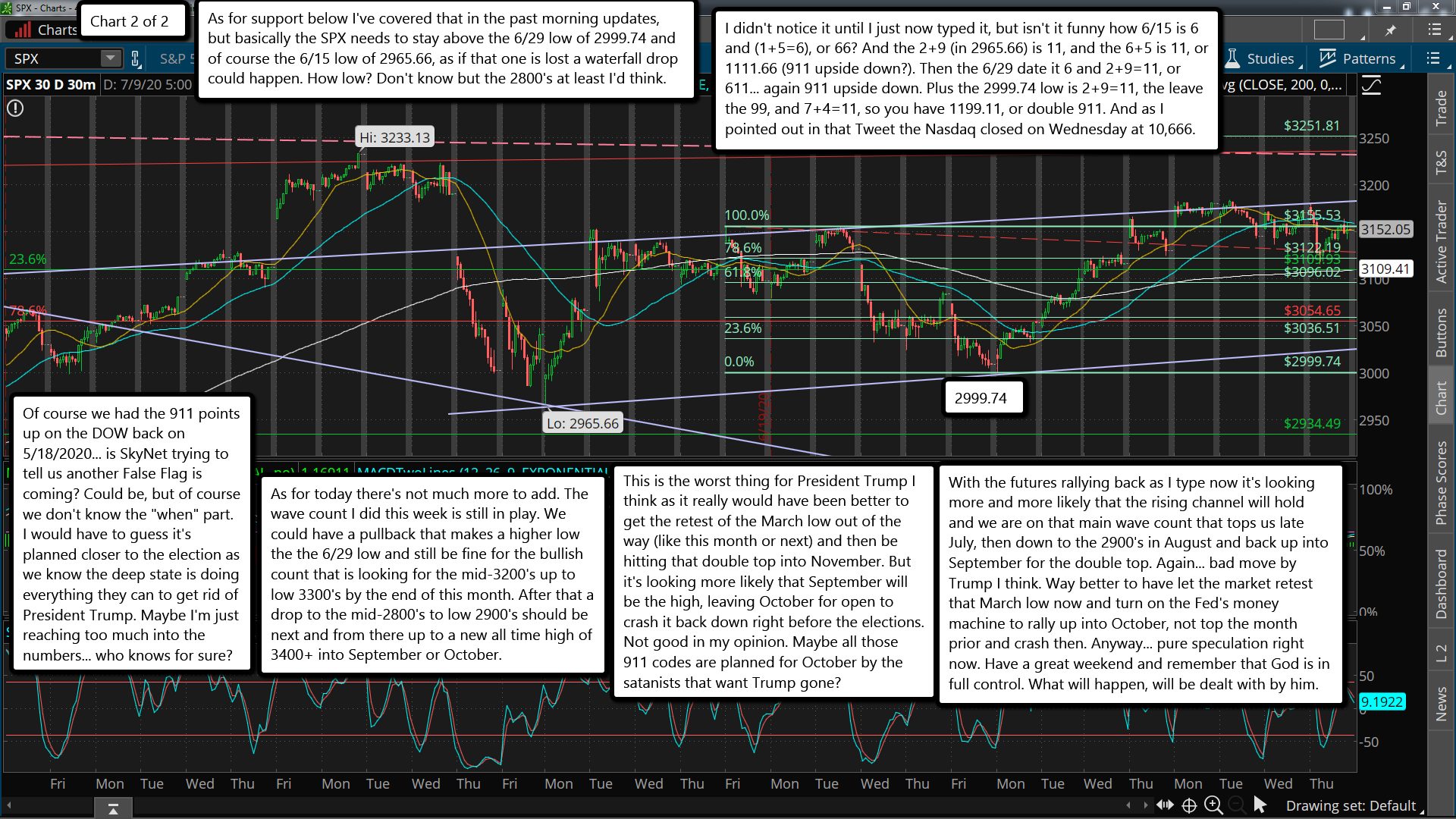 Of course we had the 911 points up on the DOW back on 5/18/2020... is SkyNet trying to tell us another False Flag is coming? Could be, but of course we don't know the "when" part. I would have to guess it's planned closer to the election as we know the deep state is doing everything they can to get rid of President Trump. Maybe I'm just reaching too much into the numbers... who knows for sure?

As for today there's not much more to add. The wave count I did this week is still in play. We could have a pullback that makes a higher low the the 6/29 low and still be fine for the bullish count that is looking for the mid-3200's up to low 3300's by the end of this month. After that a drop to the mid-2800's to low 2900's should be next and from there up to a new all time high of 3400+ into September or October.

This is the worst thing for President Trump I think as it really would have been better to get the retest of the March low out of the way (like this month or next) and then be hitting that double top into November. But it's looking more likely that September will be the high, leaving October for open to crash it back down right before the elections. Not good in my opinion. Maybe all those 911 codes are planned for October by the satanists that want Trump gone?

With the futures rallying back as I type now it's looking more and more likely that the rising channel will hold and we are on that main wave count that tops us late July, then down to the 2900's in August and back up into September for the double top. Again... bad move by Trump I think. Way better to have let the market retest that March low now and turn on the Fed's money machine to rally up into October, not top the month prior and crash then. Anyway... pure speculation right now. Have a great weekend and remember that God is in full control. What will happen, will be dealt with by him.