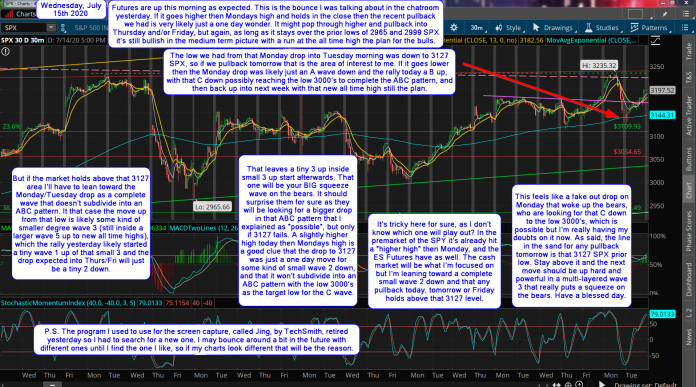 Futures are up this morning as expected. This is the bounce I was talking about in the chatroom yesterday. If it goes higher then Mondays high and holds in the close then the recent pullback we had is very likely just a one day wonder. It might pop through higher and pullback into Thursday and/or Friday, but again, as long as it stays over the prior lows of 2965 and 2999 SPX it's still bullish in the medium term picture with a run at the all time high the plan for the bulls.

The low we had from that Monday drop into Tuesday morning was down to 3127 SPX, so if we pullback tomorrow that is the area of interest to me. If it goes lower then the Monday drop was likely just an A wave down and the rally today a B up, with that C down possibly reaching the low 3000's to complete the ABC pattern, and then back up into next week with that new all time high still the plan.

But if the market holds above that 3127 area I'll have to lean toward the Monday/Tuesday drop as a complete wave that doesn't subdivide into an ABC pattern. It that case the move up from that low is likely some kind of smaller degree wave 3 (still inside a larger wave 5 up to new all time highs), which the rally yesterday likely started a tiny wave 1 up of that small 3 and the drop expected into Thurs/Fri will just be a tiny 2 down.

That leaves a tiny 3 up inside small 3 up start afterwards. That one will be your BIG squeeze wave on the bears. It should surprise them for sure as they will be looking for a bigger drop in that ABC pattern that I explained as "possible", but only if 3127 fails. A slightly higher high today then Mondays high is a good clue that the drop to 3127 was just a one day move for some kind of small wave 2 down, and that it won't subdivide into an ABC pattern with the low 3000's as the target low for the C wave.

It's tricky here for sure, as I don't know which one will play out? In the premarket of the SPY it's already hit a "higher high" then Monday, and the ES Futures have as well. The cash market will be what I'm focused on but I'm leaning toward a complete small wave 2 down and that any pullback today, tomorrow or Friday holds above that 3127 level.

This feels like a fake out drop on Monday that woke up the bears, who are looking for that C down to the low 3000's, which is possible but I'm really having my doubts on it now. As said, the line in the sand for any pullback tomorrow is that 3127 SPX prior low. Stay above it and the next move should be up hard and powerful in a multi-layered wave 3 that really puts a squeeze on the bears. Have a blessed day.

P.S. The program I used to use for the screen capture, called Jing, by TechSmith, retired yesterday so I had to search for a new one. I may bounce around a bit in the future with different ones until I find the one I like, so if my charts look different that will be the reason.