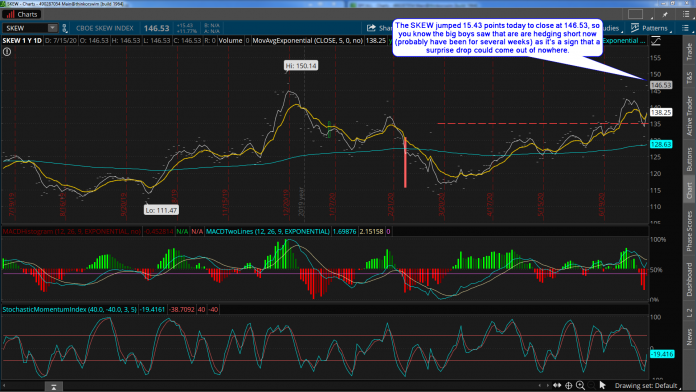 Futures are down this morning, but not huge... kinda like what I was looking for as I was only 60/40 bearish for today. It feels like they are holding the market up until after this monthly options expiration passes by, which is Friday of course. Something is coming soon, but figuring out the "when" part is tough. Yesterday the SKEW shot up big again, hitting 146.53... a big jump for one day. I gotta think the big boys are paying attention to it, as it suggests a surprise drop could happen at any time. And I found this tweet interesting, as again, things behind the scenes just aren't normal. Read down the thread as well as someone is buying large blocks of puts.

HEADS UP: The short term vol in QQQ will literally melt your skin off from 30 yards now-this is a blow torch...new record and uh nope...it is not broken. No idea what is lurking but WTFF bro...😯 pic.twitter.com/MbXpYPcKrI

I'm writing this post early, well before the open as I have to leave today and won't be back until the afternoon session. So the market could turn back up or move down more before then... who knows? Right now it might be waiting on the Jobs number, which it due out at 8:30 am EST and I'll be gone by then, but it could be a market mover if it's a surprise number. Nothing more to add right as it's all been covered in the prior posts this week. So I'll keep this one short and end it here. God Bless America.