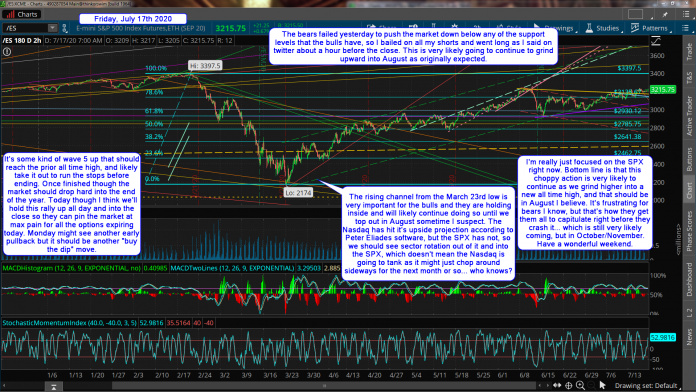 The bears failed yesterday to push the market down below any of the support levels that the bulls have, so I bailed on all my shorts and went long as I said on twitter about a hour before the close. This is very likely going to continue to grind upward into August as originally expected.

It's some kind of wave 5 up that should reach the prior all time high, and likely take it out to run the stops before ending. Once finished though the market should drop hard into the end of the year. Today though I think we'll hold this rally up all day and into the close so they can pin the market at max pain for all the options expiring today. Monday might see another early pullback but it should be another "buy the dip" move.

The rising channel from the March 23rd low is very important for the bulls and they are holding inside and will likely continue doing so until we top out in August sometime I suspect. The Nasdaq has hit it's upside projection according to Peter Eliades software, but the SPX has not, so we should see sector rotation out of it and into the SPX, which doesn't mean the Nasdaq is going to tank as it might just chop around sideways for the next month or so... who knows?

I'm really just focused on the SPX right now. Bottom line is that this choppy action is very likely to continue as we grind higher into a new all time high, and that should be in August I believe. It's frustrating for bears I know, but that's how they get them all to capitulate right before they crash it... which is still very likely coming, but in October/November. Have a wonderful weekend.