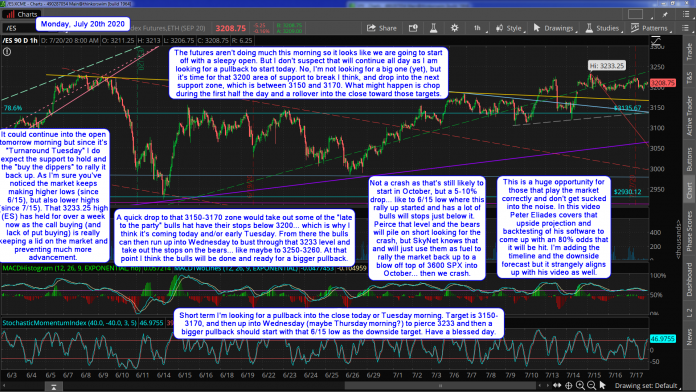 The futures aren't doing much this morning so it looks like we are going to start off with a sleepy open. But I don't suspect that will continue all day as I am looking for a pullback to start today. No, I'm not looking for a big one (yet), but it's time for that 3200 area of support to break I think, and drop into the next support zone, which is between 3150 and 3170. What might happen is chop during the first half the day and a rollover into the close toward those targets.

It could continue into the open tomorrow morning but since it's "Turnaround Tuesday" I do expect the support to hold and the "buy the dippers" to rally it back up. As I'm sure you've noticed the market keeps making higher lows (since 6/15), but also lower highs (since 7/15). That 3233.25 high (ES) has held for over a week now as the call buying (and lack of put buying) is really keeping a lid on the market and preventing much more advancement.

A quick drop to that 3150-3170 zone would take out some of the "late to the party" bulls hat have their stops below 3200... which is why I think it's coming today and/or early Tuesday. From there the bulls can then run up into Wednesday to bust through that 3233 level and take out the stops on the bears... like maybe to 3250-3260. At that point I think the bulls will be done and ready for a bigger pullback.

Not a crash as that's still likely to start in October, but a 5-10% drop... like to 6/15 low where this rally up started and has a lot of bulls will stops just below it. Peirce that level and the bears will pile on short looking for the crash, but SkyNet knows that and will just use them as fuel to rally the market back up to a blow off top of 3600 SPX into October... then we crash.

This is a huge opportunity for those that play the market correctly and don't get sucked into the noise. In this video Peter Eliades covers that upside projection and backtesting of his software to come up with an 80% odds that it will be hit. I'm adding the timeline and the downside forecast but it strangely aligns up with his video as well.

Short term I'm looking for a pullback into the close today or Tuesday morning. Target is 3150-3170, and then up into Wednesday (maybe Thursday morning?) to pierce 3233 and then a bigger pullback should start with that 6/15 low as the downside target. Have a blessed day.