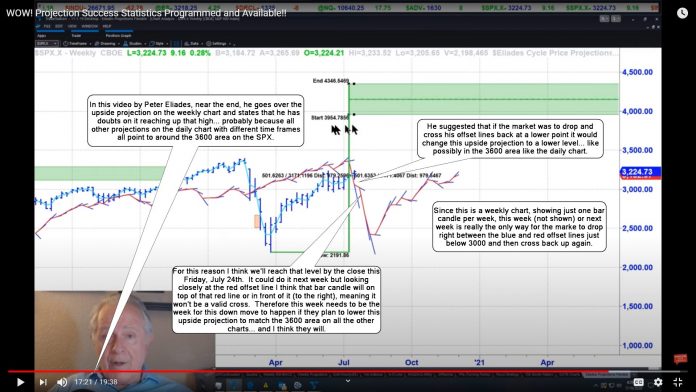 I posted on Twitter yesterday a chart showing my reasons for thinking we are going to pullback into the 3000 area by this Friday, which I re posting here again. It's really just speculation, a best guess, as I don't see it possible to reach the upside targets on that weekly chart. And the only way to change them is to drop back and re-cross the offset lines at a lower level to give a lower projection.

On all of Peter's other daily charts they all point to the same general area of around 3600 on the SPX, so I have to think they are correct due to how many are projecting the same zone. It's hard to tell on the chart exactly as to whether this week or next week will drop in between the red and blue offset lines, but it looks like it's this week as next weeks "weekly candle" would probably fall to the right side of both the red and blue offset lines, and that wouldn't be a valid cross through one and back up through the other, so it really has to happen by this Friday I think or else it won't happen at all.

And that would leave the upside projections intact as going into next week and the month of August those offset lines are merged together on top of each other and falling down below 2500, so that's just not likely going to happen I think. Today needs to be like June 9th, then tomorrow like June 10th and Friday needs to be the flush out drop like June 11th.

Will it happen that way? Who knows? It's probably just wishful thinking on my part because I'm short and could be biased, but I try to ignore that and just focus on what I really see, and this is it. I could be totally wrong, as no one gets all their calls correct. I missed the early call this week when I thought we'd pullback to 3150-3170 on Monday and then run up to 3250-3260 by Wednesday. Instead they just ran it straight up there and topped out at 3277 yesterday.

This morning we see the futures mostly flat so no clue there on the early direction of the market. But then again, I don't think June 9th started off much different. Both the 9th and 10th were slow down moves and then the fall of the cliff move on the 11th. No doubt that keep the bulls buying the dip and the bears scratching their head on whether the first two days were the start of a bigger drop or just a small dip.

Of course by the time the big down day happened on the 11th the bears woke up and shorted the bottom... typical trickery by SkyNet. Well, that's all I have this morning. Right or wrong it's the best I can give you. Have a wonderful day.