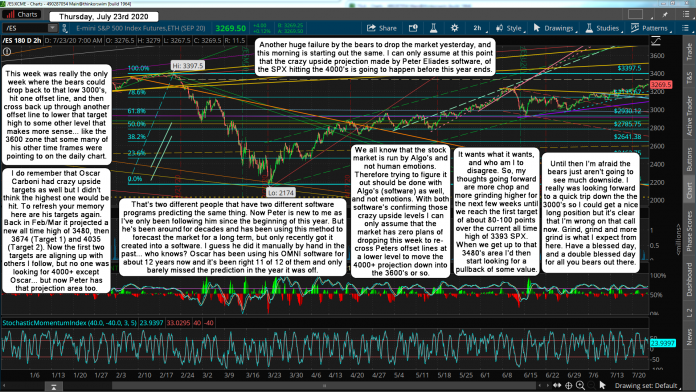 Another huge failure by the bears to drop the market yesterday, and this morning is starting out the same. I can only assume at this point that the crazy upside projection made by Peter Eliades software, of the SPX hitting the 4000's is going to happen before this year ends.

This week was really the only week where the bears could drop back to that low 3000's, hit one offset line, and then cross back up through another offset line to lower that target high to some other level that makes more sense... like the 3600 zone that some many of his other time frames were pointing to on the daily chart.

I do remember that Oscar Carboni had crazy upside targets as well but I didn't think the highest one would be hit. To refresh your memory here are his targets again. Back in Feb/Mar it projected a new all time high of 3480, then 3674 (Target 1) and 4035 (Target 2). Now the first two targets are aligning up with others I follow, but no one was looking for 4000+ except Oscar... but now Peter has that projection area too.

That's two different people that have two different software programs predicting the same thing. Now Peter is new to me as I've only been following him since the beginning of this year. But he's been around for decades and has been using this method to forecast the market for a long term, but only recently got it created into a software. I guess he did it manually by hand in the past... who knows? Oscar has been using his OMNI software for about 12 years now and it's been right 11 of 12 of them and only barely missed the prediction in the year it was off.

We all know that the stock market is run by Algo's and not human emotions. Therefore trying to figure it out should be done with Algo's (software) as well, and not emotions. With both software's confirming those crazy upside levels I can only assume that the market has zero plans of dropping this week to re-cross Peters offset lines at a lower level to move the 4000+ projection down into the 3600's or so.

It wants what it wants, and who am I to disagree. So, my thoughts going forward are more chop and more grinding higher for the next few weeks until we reach the first target of about 80-100 points over the current all time high of 3393 SPX. When we get up to that 3480's area I'd then start looking for a pullback of some value.

Until then I'm afraid the bears just aren't going to see much downside. I really was looking forward to a quick trip down the the 3000's so I could get a nice long position but it's clear that I'm wrong on that call now. Grind, grind and more grind is what I expect from here. Have a blessed day, and a double blessed day for all you bears out there.

Here's that video again by Peter Eliades in case you missed it previously...

And here's a new one from Oscar Carboni, where you'll see his upset targets written on the white board.