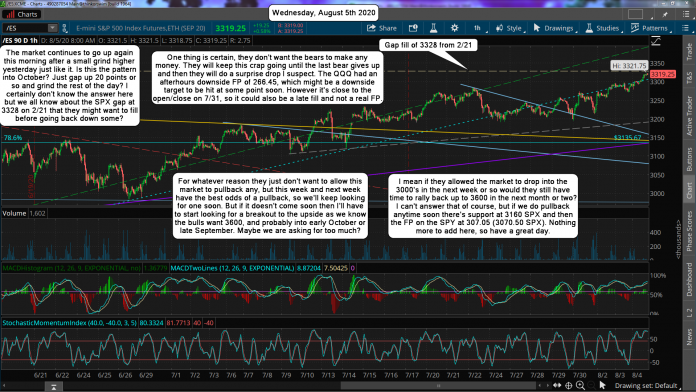 The market continues to go up again this morning after a small grind higher yesterday just like it. Is this the pattern into October? Just gap up 20 points or so and grind the rest of the day? I certainly don't know the answer here but we all know about the SPX gap at 3328 on 2/21 that they might want to fill before going back down some?

One thing is certain, they don't want the bears to make any money. They will keep this crap going until the last bear gives up and then they will do a surprise drop I suspect. The QQQ had an afterhours downside FP of 266.45, which might be a downside target to be hit at some point soon. However it's close to the open/close on 7/31, so it could also be a late fill and not a real FP.

For whatever reason they just don't want to allow this market to pullback any, but this week and next week have the best odds of a pullback, so we'll keep looking for one soon. But if it doesn't come soon then I'll have to start looking for a breakout to the upside as we know the bulls want 3600, and probably into early October or late September. Maybe we are asking for too much?