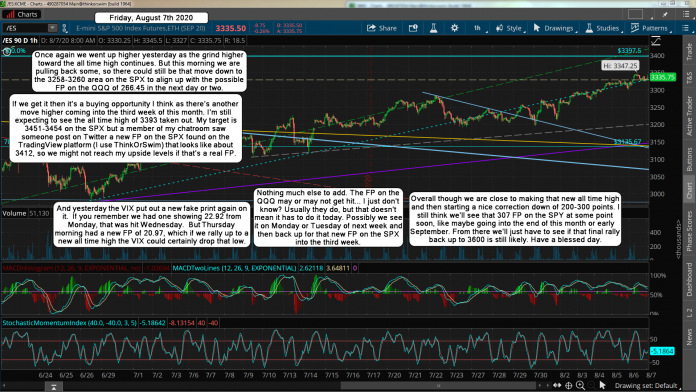 Once again we went up higher yesterday as the grind higher toward the all time high continues. But this morning we are pulling back some, so there could still be that move down to the 3258-3260 area on the SPX to align up with the possible FP on the QQQ of 266.45 in the next day or two.

If we get it then it's a buying opportunity I think as there's another move higher coming into the third week of this month. I'm still expecting to see the all time high of 3393 taken out. My target is 3451-3454 on the SPX but a member of my chatroom saw someone post on Twitter a new FP on the SPX found on the TradingView platform (I use ThinkOrSwim) that looks like about 3412, so we might not reach my upside levels if that's a real FP.

And yesterday the VIX put out a new fake print again on it.  If you remember we had one showing 22.92 from Monday, that was hit Wednesday.  But Thursday morning had a new FP of 20.97, which if we rally up to a new all time high the VIX could certainly drop that low.

Nothing much else to add. The FP on the QQQ may or may not get hit... I just don't know? Usually they do, but that doesn't mean it has to do it today. Possibly we see it on Monday or Tuesday of next week and then back up for that new FP on the SPX into the third week.

Overall though we are close to making that new all time high and then starting a nice correction down of 200-300 points. I still think we'll see that 307 FP on the SPY at some point soon, like maybe going into the end of this month or early September. From there we'll just have to see if that final rally back up to 3600 is still likely. Have a blessed day.