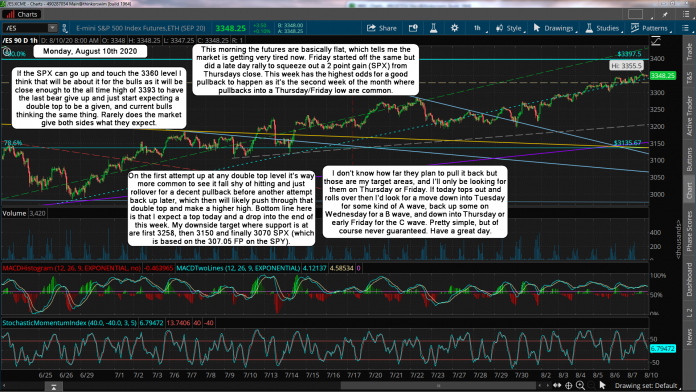 This morning the futures are basically flat, which tells me the market is getting very tired now. Friday started off the same but did a late day rally to squeeze out a 2 point gain (SPX) from Thursdays close. This week has the highest odds for a good pullback to happen as it's the second week of the month where pullbacks into a Thursday/Friday low are common.

If the SPX can go up and touch the 3360 level I think that will be about it for the bulls as it will be close enough to the all time high of 3393 to have the last bear give up and just start expecting a double top to be a given, and current bulls thinking the same thing. Rarely does the market give both sides what they expect.

On the first attempt up at any double top level it's way more common to see it fall shy of hitting and just rollover for a decent pullback before another attempt back up later, which then will likely push through that double top and make a higher high. Bottom line here is that I expect a top today and a drop into the end of this week. My downside target where support is at are first 3258, then 3150 and finally 3070 SPX (which is based on the 307.05 FP on the SPY).

I don't know how far they plan to pull it back but those are my target areas, and I'll only be looking for them on Thursday or Friday. If today tops out and rolls over then I'd look for a move down into Tuesday for some kind of A wave, back up some on Wednesday for a B wave, and down into Thursday or early Friday for the C wave. Pretty simple, but of course never guaranteed. Have a great day.