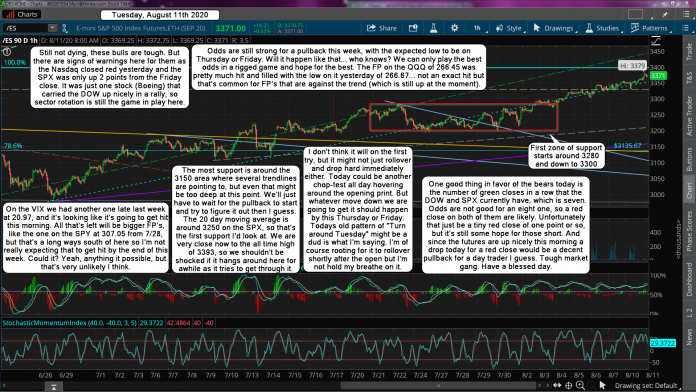 Still not dying, these bulls are tough. But there are signs of warnings here for them as the Nasdaq closed red yesterday and the SPX was only up 2 points from the Friday close. It was just one stock (Boeing) that carried the DOW up nicely in a rally, so sector rotation is still the game in play here.

Odds are still strong for a pullback this week, with the expected low to be on Thursday or Friday. Will it happen like that... who knows? We can only play the best odds in a rigged game and hope for the best. The FP on the QQQ of 266.45 was pretty much hit and filled with the low on it yesterday of 266.67... not an exact hit but that's common for FP's that are against the trend (which is still up at the moment).

On the VIX we had another one late last week at 20.97, and it's looking like it's going to get hit this morning. All that's left will be bigger FP's, like the one on the SPY at 307.05 from 7/28, but that's a long ways south of here so I'm not really expecting that to get hit by the end of this week. Could it? Yeah, anything it possible, but that's very unlikely I think.

The most support is around the 3150 area where several trendlines are pointing to, but even that might be too deep at this point. We'll just have to wait for the pullback to start and try to figure it out then I guess. The 20 day moving average is around 3250 on the SPX, so that's the first support I'd look at. We are very close now to the all time high of 3393, so we shouldn't be shocked if it hangs around here for awhile as it tries to get through it.

I don't think it will on the first try, but it might not just rollover and drop hard immediately either. Today could be another chop-fest all day hovering around the opening print. But whatever move down we are going to get it should happen by this Thursday or Friday. Todays old pattern of "Turn around Tuesday" might be a dud is what I'm saying. I'm of course rooting for it to rollover shortly after the open but I'm not hold my breathe on it.

One good thing in favor of the bears today is the number of green closes in a row that the DOW and SPX currently have, which is seven. Odds are not good for an eight one, so a red close on both of them are likely. Unfortunately that just be a tiny red close of one point or so, but it's still some hope for those short. And since the futures are up nicely this morning a drop today for a red close would be a decent pullback for a day trader I guess. Tough market gang. Have a blessed day.