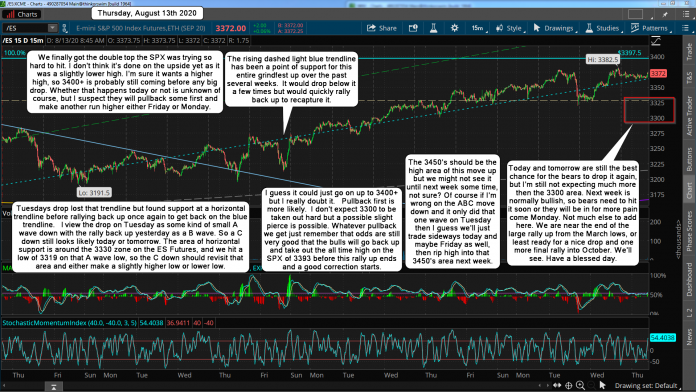 We finally got the double top the SPX was trying so hard to hit. I don't think it's done on the upside yet as it was a slightly lower high. I'm sure it wants a higher high, so 3400+ is probably still coming before any big drop. Whether that happens today or not is unknown of course, but I suspect they will pullback some first and make another run higher either Friday or Monday.

The rising dashed light blue trendline has been a point of support for this entire grindfest up over the past several weeks.  It would drop below it a few times but would quickly rally back up to recapture it.

Tuesdays drop lost that trendline but found support at a horizontal trendline before rallying back up once again to get back on the blue trendline.   l view the drop on Tuesday as some kind of small A wave down with the rally back up yesterday as a B wave. So a C down still looks likely today or tomorrow. The area of horizontal support is around the 3330 zone on the ES Futures, and we hit a low of 3319 on that A wave low, so the C down should revisit that area and either make a slightly higher low or lower low.

I guess it could just go on up to 3400+ but I really doubt it.   Pullback first is more likely.  I don't expect 3300 to be taken out hard but a possible slight pierce is possible. Whatever pullback we get just remember that odds are still very good that the bulls will go back up and take out the all time high on the SPX of 3393 before this rally up ends and a good correction starts.

The 3450's should be the high area of this move up but we might not see it until next week some time, not sure? Of course if I'm wrong on the ABC move down and it only did that one wave on Tuesday then I guess we'll just trade sideways today and maybe Friday as well, then rip high into that 3450's area next week.

Today and tomorrow are still the best chance for the bears to drop it again, but I'm still not expecting much more then the 3300 area. Next week is normally bullish, so bears need to hit it soon or they will be in for more pain come Monday. Not much else to add here. We are near the end of the large rally up from the March lows, or least ready for a nice drop and one more final rally into October. We'll see. Have a blessed day.