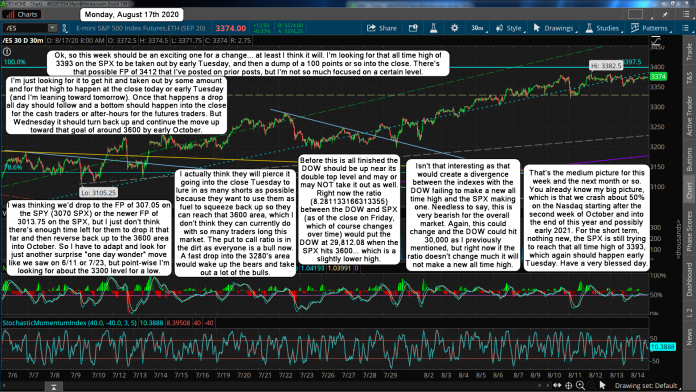 Ok, so this week should be an exciting one for a change... at least I think it will. I'm looking for that all time high of 3393 on the SPX to be taken out by early Tuesday, and then a dump of a 100 points or so into the close. There's that possible FP of 3412 that I've posted on prior posts, but I'm not so much focused on a certain level.

I'm just looking for it to get hit and taken out by some amount and for that high to happen at the close today or early Tuesday (and I'm leaning toward tomorrow). Once that happens a drop all day should follow and a bottom should happen into the close for the cash traders or after-hours for the futures traders. But Wednesday it should turn back up and continue the move up toward that goal of around 3600 by early October.

I actually think they will pierce it going into the close Tuesday to lure in as many shorts as possible because they want to use them as fuel to squeeze back up so they can reach that 3600 area, which I don't think they can currently do with so many traders long this market. The put to call ratio is in the dirt as everyone is a bull now. A fast drop into the 3280's area would wake up the bears and take out a lot of the bulls.

Isn't that interesting as that would create a divergence between the indexes with the DOW failing to make a new all time high and the SPX making one. Needless to say, this is very bearish for the overall market. Again, this could change and the DOW could hit 30,000 as I previously mentioned, but right now if the ratio doesn't change much it will not make a new all time high.

That's the medium picture for this week and the next month or so. You already know my big picture, which is that we crash about 50% on the Nasdaq starting after the second week of October and into the end of this year and possibly early 2021. For the short term, nothing new, the SPX is still trying to reach that all time high of 3393, which again should happen early Tuesday. Have a very blessed day.