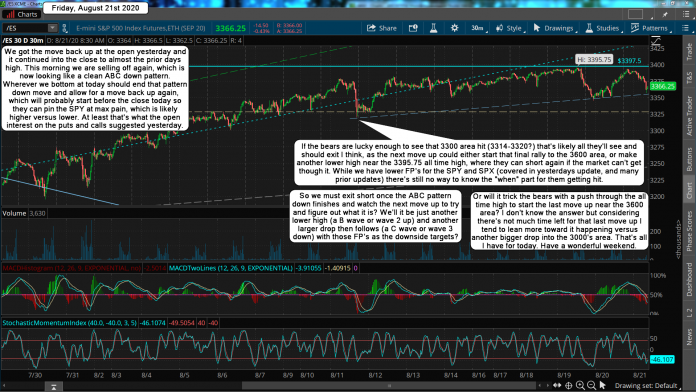 We got the move back up at the open yesterday and it continued into the close to almost the prior days high. This morning we are selling off again, which is now looking like a clean ABC down pattern. Wherever we bottom at today should end that pattern down move and allow for a move back up again, which will probably start before the close today so they can pin the SPY at max pain, which is likely higher versus lower. At least that's what the open interest on the puts and calls suggested yesterday.

If the bears are lucky enough to see that 3300 area hit (3314-3320?) that's likely all they'll see and should exit I think, as the next move up could either start that final rally to the 3600 area, or make another lower high near the 3395.75 all time high, where they can short again if the market can't get though it. While we have lower FP's for the SPY and SPX (covered in yesterdays update, and many prior updates) there's still no way to know the "when" part for them getting hit.

So we must exit short once the ABC pattern down finishes and watch the next move up to try and figure out what it is? We'll it be just another lower high (a B wave or wave 2 up) and another larger drop then follows (a C wave or wave 3 down) with those FP's as the downside targets?

Or will it trick the bears with a push through the all time high to start the last move up near the 3600 area? I don't know the answer but considering there's not much time left for that last move up I tend to lean more toward it happening versus another bigger drop into the 3000's area. That's all I have for today. Have a wonderful weekend.