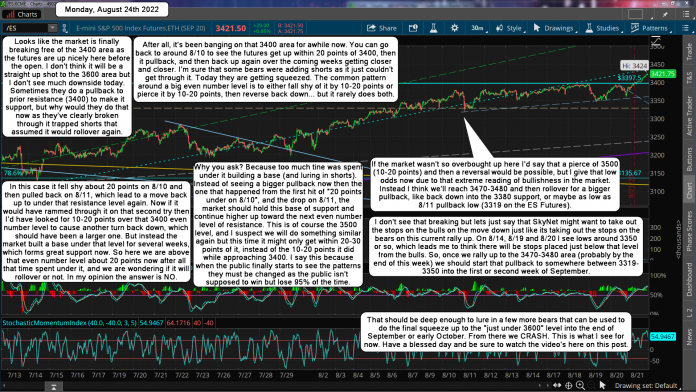 Looks like the market is finally breaking free of the 3400 area as the futures are up nicely here before the open. I don't think it will be a straight up shot to the 3600 area but I don't see much downside today. Sometimes they do a pullback to prior resistance (3400) to make it support, but why would they do that now as they've clearly broken through it trapped shorts that assumed it would rollover again.

After all, it's been banging on that 3400 area for awhile now. You can go back to around 8/10 to see the futures get up within 20 points of 3400, then it pullback, and then back up again over the coming weeks getting closer and closer. I'm sure that some bears were adding shorts as it just couldn't get through it. Today they are getting squeezed. The common pattern around a big even number level is to either fall shy of it by 10-20 points or pierce it by 10-20 points, then reverse back down... but it rarely does both.

In this case it fell shy about 20 points on 8/10 and then pulled back on 8/11, which lead to a move back up to under that resistance level again. Now if it would have rammed through it on that second try then I'd have looked for 10-20 points over that 3400 even number level to cause another turn back down, which should have been a larger one. But instead the market built a base under that level for several weeks, which forms great support now. So here we are above that even number level about 20 points now after all that time spent under it, and we are wondering if it will rollover or not. In my opinion the answer is NO.

Why you ask? Because too much tine was spent under it building a base (and luring in shorts). Instead of seeing a bigger pullback now then the one that happened from the first hit of "20 points under on 8/10", and the drop on 8/11, the market should hold this base of support and continue higher up toward the next even number level of resistance. This is of course the 3500 level, and I suspect we will do something similar again but this time it might only get within 20-30 points of it, instead of the 10-20 points it did while approaching 3400. I say this because when the public finally starts to see the patterns they must be changed as the public isn't supposed to win but lose 95% of the time.

If the market wasn't so overbought up here I'd say that a pierce of 3500 (10-20 points) and then a reversal would be possible, but I give that low odds now due to that extreme reading of bullishness in the market. Instead I think we'll reach 3470-3480 and then rollover for a bigger pullback, like back down into the 3380 support, or maybe as low as 8/11 pullback low (3319 on the ES Futures).

I don't see that breaking but lets just say that SkyNet might want to take out the stops on the bulls on the move down just like its taking out the stops on the bears on this current rally up. On 8/14, 8/19 and 8/20 I see lows around 3350 or so, which leads me to think there will be stops placed just below that level from the bulls. So, once we rally up to the 3470-3480 area (probably by the end of this week) we should start that pullback to somewhere between 3319-3350 into the first or second week of September.

That should be deep enough to lure in a few more bears that can be used to do the final squeeze up to the "just under 3600" level into the end of September or early October. From there we CRASH. This is what I see for now. Have a blessed day and be sure to watch the video's here on this post.

Trump Ready To De-couple From The Globalist System