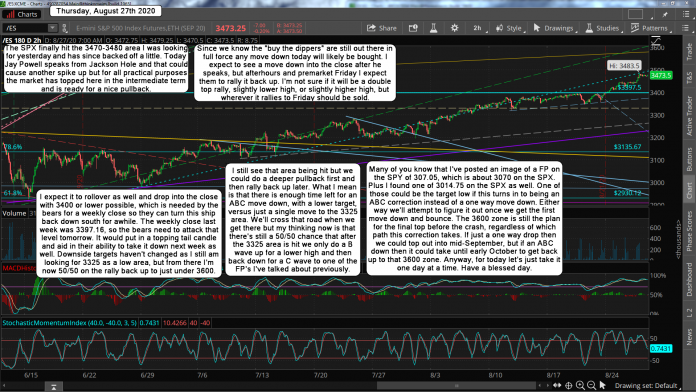 The SPX finally hit the 3470-3480 area I was looking for yesterday and has since backed off a little. Today Jay Powell speaks from Jackson Hole and that could cause another spike up but for all practical purposes the market has topped here in the intermediate term and is ready for a nice pullback.

Since we know the "buy the dippers" are still out there in full force any move down today will likely be bought. I expect to see a move down into the close after he speaks, but afterhours and premarket Friday I expect them to rally it back up. I'm not sure if it will be a double top rally, slightly lower high, or slightly higher high, but wherever it rallies to Friday should be sold.

I expect it to rollover as well and drop into the close with 3400 or lower possible, which is needed by the bears for a weekly close so they can turn this ship back down south for awhile. The weekly close last week was 3397.16, so the bears need to attack that level tomorrow. It would put in a topping tail candle and aid in their ability to take it down next week as well. Downside targets haven't changed as I still am looking for 3325 as a low area, but from there I'm now 50/50 on the rally back up to just under 3600.

I still see that area being hit but we could do a deeper pullback first and then rally back up later. What I mean is that there is enough time left for an ABC move down, with a lower target, versus just a single move to the 3325 area. We'll cross that road when we get there but my thinking now is that there's still a 50/50 chance that after the 3325 area is hit we only do a B wave up for a lower high and then back down for a C wave to one of the FP's I've talked about previously.

Many of you know that I've posted an image of a FP on the SPY of 307.05, which is about 3070 on the SPX. Plus I found one of 3014.75 on the SPX as well. One of those could be the target low if this turns in to being an ABC correction instead of a one way move down. Either way we'll attempt to figure it out once we get the first move down and bounce. The 3600 zone is still the plan for the final top before the crash, regardless of which path this correction takes. If just a one way drop then we could top out into mid-September, but if an ABC down then it could take until early October to get back up to that 3600 zone. Anyway, for today let's just take it one day at a time. Have a blessed day.