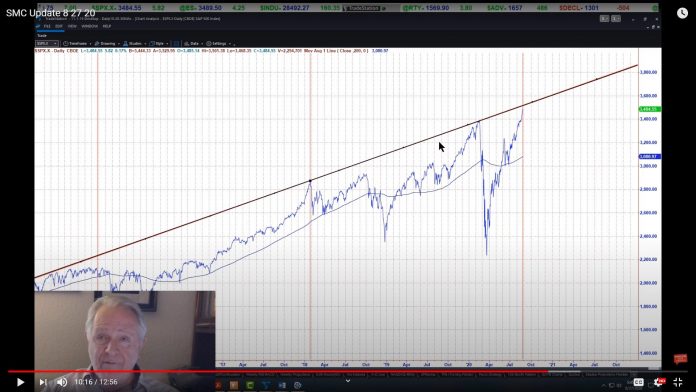 A wild day yesterday as the market swung both ways all day to shake out both sides it seems. The Fed's didn't say anything of value really to affect the market I think. The swings were more likely related to how close the SPX is to the rising trendlines in Peter Eliades charts (video posted below). Using his calculations the SPX would need to reach 3512.7013 for a hit of one trendline and 3517.1982 for a hit of both of them. That's only for today as he explains it rises less then a point each day, so the targets will rise as well.

So, if that upper level is hit today that could be all she wrote for the bulls... meaning that reaching a slightly higher high in October (just under 3600) won't be necessary. That doesn't mean it won't happen, but just that it doesn't have too. So if we hit the 3517 area today there's no more reasons left for the market to go back up for a higher high in late September or early October.

This pullback I'm looking for could be either a small one of 100-200 points (3325 area) or that deeper one (the ABC move I mentioned as possible yesterday) to one of the possible FP's I have of 307.05 on the SPY and 3013.75 on the SPX. Again, I'm 50/50 on it, but if the SPX hits the upside trendlines today I'd lean more toward an ABC move down for a deeper pullback, and then the move up into late September or early October might only be a lower high because of the trendline already being hit.

If the SPX fails to hit the trendline today and starts the pullback then I'll look for the more shallow pullback and the move back up into late September or early October should then a higher high as it will want to hit that rising trendline before rolling over and starting the crash move down. For speculation purposes if the that move back up were to top out on September 30th that would be 24 trading days from yesterday. That would move the price levels up on each rising trendline to 3535.6768 and 3539.7612 for a hit of both of them.

If we thought the market would top on October 16th that would be 36 trading days from yesterday. The targets then would be 3547.6552 and 3551.5368, so if you are wanted a higher high to short the crash from you will be rooting for the SPX to fail to hit the rising trendlines today, have that smaller pullback, and then hit them next month or so.

From a political point of view President Trump should be rooting for that higher high as close as possible to the election but with the market so close to hitting that trendline today I'm really not sure if the market is going to give that to him? He does control the US Treasury and they control the FED now, so I personally think it would be in his best interest to do the small pullback and hit the trendline in October.

I posted yesterday that JFK Jr. is going to announce to the world that he's alive on Saturday, October 17th. And we know the Deep State have another False Flag event planned for Monday, October 19th... which tells me the market MUST top prior to those dates. If it's a lower high going into early October then we all know that in Elliottwave the first pullback is the large A wave down and the rally back up the B wave... so that C wave would follow.

And in this case you can call it the Crash Wave I think. But even if we make that higher high EW does allow for the B up to go slightly higher then the start of the A down, so either scenario still points to a large C down happening in the second half of October. Have a blessed day.