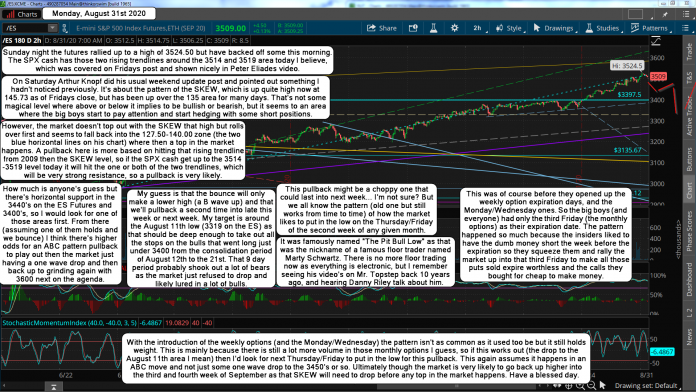 Sunday night the futures rallied up to a high of 3524.50 but have backed off some this morning. The SPX cash has those two rising trendlines around the 3514 and 3519 area today I believe, which was covered on Fridays post and shown nicely in Peter Eliades video.

On Saturday Arthur Knopf did his usual weekend update post and pointed out something I hadn't noticed previously. It's about the pattern of the SKEW, which is up quite high now at 145.73 as of Fridays close, but has been up over the 135 area for many days. That's not some magical level where above or below it implies to be bullish or bearish, but it seems to an area where the big boys start to pay attention and start hedging with some short positions.

However, the market doesn't top out with the SKEW that high but rolls over first and seems to fall back into the 127.50-140.00 zone (the two blue horizontal lines on his chart) where then a top in the market happens. A pullback here is more based on hitting that rising trendline from 2009 then the SKEW level, so if the SPX cash get up to the 3514-3519 level today it will hit the one or both of the two trendlines, which will be very strong resistance, so a pullback is very likely.

How much is anyone's guess but there's horizontal support in the 3440's on the ES Futures and 3400's, so I would look for one of those areas first. From there (assuming one of them holds and we bounce) I think there's higher odds for an ABC pattern pullback to play out then the market just having a one wave drop and then back up to grinding again with 3600 next on the agenda.

My guess is that the bounce will only make a lower high (a B wave up) and that we'll pullback a second time into late this week or next week. My target is around the August 11th low (3319 on the ES) as that should be deep enough to take out all the stops on the bulls that went long just under 3400 from the consolidation period of August 12th to the 21st. That 9 day period probably shook out a lot of bears as the market just refused to drop and likely lured in a lot of bulls.

This pullback might be a choppy one that could last into next week... I'm not sure? But we all know the pattern (old one but still works from time to time) of how the market likes to put in the low on the Thursday/Friday of the second week of any given month.

It was famously named "The Pit Bull Low" as that was the nickname of a famous floor trader named Marty Schwartz. There is no more floor trading now as everything is electronic, but I remember seeing his video's on Mr. Topstep back 10 years ago, and hearing Danny Riley talk about him. 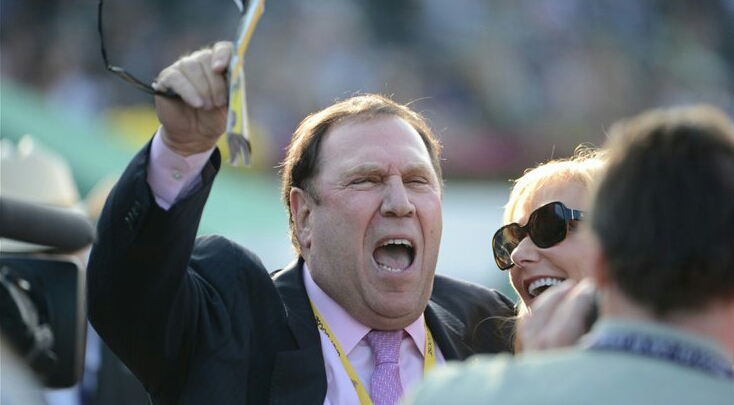 This was of course before they opened up the weekly option expiration days, and the Monday/Wednesday ones. So the big boys (and everyone) had only the third Friday (the monthly options) as their expiration date. The pattern happened so much because the insiders liked to have the dumb money short the week before the expiration so they squeeze them and rally the market up into that third Friday to make all those puts sold expire worthless and the calls they bought for cheap to make money.

With the introduction of the weekly options (and the Monday/Wednesday) the pattern isn't as common as it used too be but it still holds weight. This is mainly because there is still a lot more volume in those monthly options I guess, so if this works out (the drop to the August 11th area I mean) then I'd look for next Thursday/Friday to put in the low for this pullback. This again assumes it happens in an ABC move and not just some one wave drop to the 3450's or so. Ultimately though the market is very likely to go back up higher into the third and fourth week of September as that SKEW will need to drop before any top in the market happens. Have a blessed day.