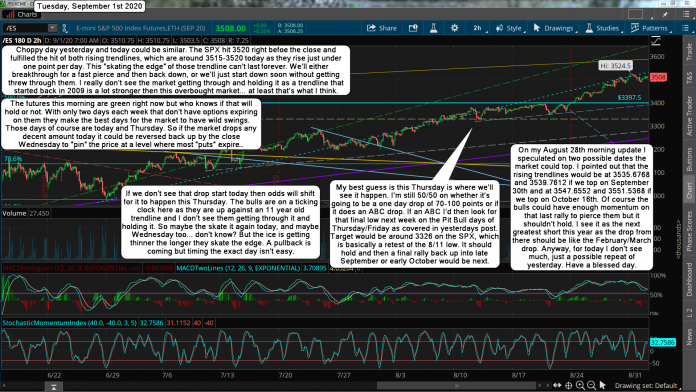 Choppy day yesterday and today could be similar. The SPX hit 3520 right befoe the close and fulfilled the hit of both rising trendlines, which are around 3515-3520 today as they rise just under one point per day. This "skating the edge" of those trendline can't last forever. We'll either breakthrough for a fast pierce and then back down, or we'll just start down soon without getting threw through them. I really don't see the market getting through and holding it as a trendline that started back in 2009 is a lot stronger then this overbought market... at least that's what I think.

The futures this morning are green right now but who knows if that will hold or not. With only two days each week that don't have options expiring on them they make the best days for the market to have wild swings. Those days of course are today and Thursday. So if the market drops any decent amount today it could be reversed back up by the close Wednesday to "pin" the price at a level where most "puts" expire worthless.

If we don't see that drop start today then odds will shift for it to happen this Thursday. The bulls are on a ticking clock here as they are up against an 11 year old trendline and I don't see them getting through it and holding it. So maybe the skate it again today, and maybe Wednesday too... don't know? But the ice is getting thinner the longer they skate the edge. A pullback is coming but timing the exact day isn't easy.

My best guess is this Thursday is where we'll see it happen. I'm still 50/50 on whether it's going to be a one day drop of 70-100 points or if it does an ABC drop. If an ABC I'd then look for that final low next week on the Pit Bull days of Thursday/Friday as covered in yesterdays post. Target would be around 3326 on the SPX, which is basically a retest of the 8/11 low. It should hold and then a final rally back up into late September or early October would be next.

On my August 28th morning update I speculated on two possible dates the market could top. I pointed out that the rising trendlines would be at 3535.6768 and 3539.7612 if we top on September 30th and at 3547.6552 and 3551.5368 if we top on October 16th. Of course the bulls could have enough momentum on that last rally to pierce them but it shouldn't hold. I see it as the next greatest short this year as the drop from there should be like the February/March drop. Anyway, for today I don't see much, just a possible repeat of yesterday. Have a blessed day.