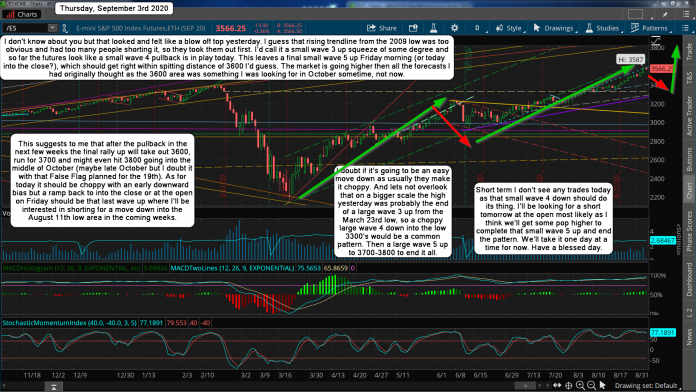 I don't know about you but that looked and felt like a blow off top yesterday. I guess that rising trendline from the 2009 low was too obvious and had too many people shorting it, so they took them out first. I'd call it a small wave 3 up squeeze of some degree and so far the futures look like a small wave 4 pullback is in play today. This leaves a final small wave 5 up Friday morning (or today into the close?), which should get right within spitting distance of 3600 I'd guess. The market is going higher then all the forecasts I had originally thought as the 3600 area was something I was looking for in October sometime, not now.

This suggests to me that after the pullback in the next few weeks the final rally up will take out 3600, run for 3700 and might even hit 3800 going into the middle of October (maybe late October but I doubt it with that False Flag planned for the 19th). As for today it should be choppy with an early downward bias but a ramp back to into the close or at the open on Friday should be that last wave up where I'll be interested in shorting for a move down into the August 11th low area in the coming weeks.

I doubt if it's going to be an easy move down as usually they make it choppy. And lets not overlook that on a bigger scale the high yesterday was probably the end of a large wave 3 up from the March 23rd low, so a choppy large wave 4 down into the low 3300's would be a common pattern. Then a large wave 5 up to 3700-3800 to end it all.

Short term I don't see any trades today as that small wave 4 down should do its thing. I'll be looking for a short tomorrow at the open most likely as I think we'll get some pop higher to complete that small wave 5 up and end the pattern. We'll take it one day at a time for now. Have a blessed day.