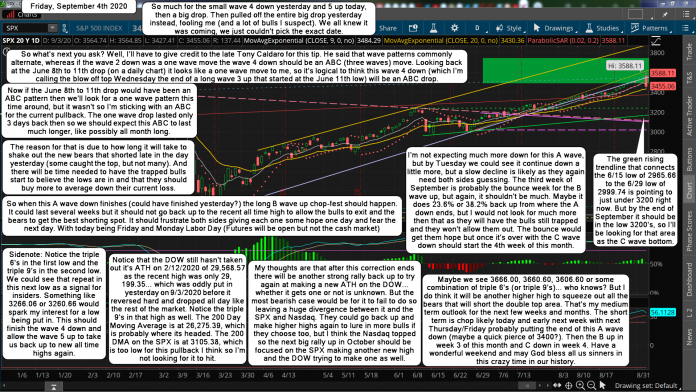 So much for the small wave 4 down yesterday and 5 up today, then a big drop. Then pulled off the entire big drop yesterday instead, fooling me (and a lot of bulls I suspect). We all knew it was coming, we just couldn't pick the exact date.

So what's next you ask? Well, I'll have to give credit to the late Tony Caldaro for this tip. He said that wave patterns commonly alternate, whereas if the wave 2 down was a one wave move the wave 4 down should be an ABC (three waves) move. Looking back at the June 8th to 11th drop (on a daily chart) it looks like a one wave move to me, so it's logical to think this wave 4 down (which I'm calling the blow off top Wednesday the end of a long wave 3 up that started at the June 11th low) will be an ABC drop.

Now if the June 8th to 11th drop would have been an ABC pattern then we'll look for a one wave pattern this time around, but it wasn't so I'm sticking with an ABC for the current pullback. The one wave drop lasted only 3 days back then so we should expect this ABC to last much longer, like possibly all month long.

The reason for that is due to how long it will take to shake out the new bears that shorted late in the day yesterday (some caught the top, but not many). And there will be time needed to have the trapped bulls start to believe the lows are in and that they should buy more to average down their current loss.

So when this A wave down finishes (could have finished yesterday?) the long B wave up chop-fest should happen. It could last several weeks but it should not go back up to the recent all time high to allow the bulls to exit and the bears to get the best shorting spot. It should frustrate both sides giving each one some hope one day and fear the next day. With today being Friday and Monday Labor Day (Futures will be open but not the cash market)

I'm not expecting much more down for this A wave, but by Tuesday we could see it continue down a little more, but a slow decline is likely as they again need both sides guessing. The third week of September is probably the bounce week for the B wave up, but again, it shouldn't be much. Maybe it does 23.6% or 38.2% back up from where the A down ends, but I would not look for much more then that as they will have the bulls still trapped and they won't allow them out. The bounce would get them hope but once it's over with the C wave down should start the 4th week of this month.

Sidenote: Notice the triple 6's in the first low and the triple 9's in the second low. We could see that repeat in this next low as a signal for insiders. Something like 3266.06 or 3260.66 would spark my interest for a low being put in. This should finish the wave 4 down and allow the wave 5 up to take us back up to new all time highs again.

My thoughts are that after this correction ends there will be another strong rally back up to try again at making a new ATH on the DOW... whether it gets one or not is unknown. But the most bearish case would be for it to fail to do so leaving a huge divergence between it and the SPX and Nasdaq. They could go back up and make higher highs again to lure in more bulls if they choose too, but I think the Nasdaq topped so the next big rally up in October should be focused on the SPX making another new high and the DOW trying to make one as well.

Maybe we see 3666.00, 3660.60, 3606.60 or some combination of triple 6's (or triple 9's)... who knows? But I do think it will be another higher high to squeeze out all the bears that will short the double top area. That's my medium term outlook for the next few weeks and months. The short term is chop likely today and early next week with next Thursday/Friday probably putting the end of this A wave down (maybe a quick pierce of 3400?). Then the B up in week 3 of this month and C down in week 4. Have a wonderful weekend and may God bless all us sinners in this crazy time in our history.