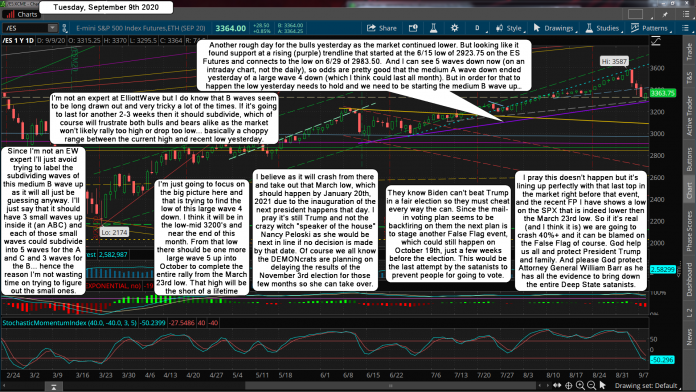 Another rough day for the bulls yesterday as the market continued lower. But looking like it found support at a rising (purple) trendline that started at the 6/15 low of 2923.75 on the ES Futures and connects to the low on 6/29 of 2983.50.  And I can see 5 waves down now (on an intraday chart, not the daily), so odds are pretty good that the medium A wave down ended yesterday of a large wave 4 down (which I think could last all month). But in order for that to happen the low yesterday needs to hold and we need to be starting the medium B wave up today.

I'm not an expert at ElliottWave but I do know that B waves seem to be long drawn out and very tricky a lot of the times. If it's going to last for another 2-3 weeks then it should subdivide, which of course will frustrate both bulls and bears alike as the market won't likely rally too high or drop too low... basically a choppy range between the current high and recent low yesterday.

Since I'm not an EW expert I'll just avoid trying to label the subdividing waves of this medium B wave up as it will all just be guessing anyway. I'll just say that it should have 3 small waves up inside it (an ABC) and each of those small waves could subdivide into 5 waves for the A and C and 3 waves for the B... hence the reason I'm not wasting time on trying to figure out the small ones.

I'm just going to focus on the big picture here and that is trying to find the low of this large wave 4 down. I think it will be in the low-mid 3200's and near the end of this month. From that low there should be one more large wave 5 up into October to complete the entire rally from the March 23rd low. That high will be the short of a lifetime

I believe as it will crash from there and take out that March low, which should happen by January 20th, 2021 due to the inauguration of the next president happens that day. I pray it's still Trump and not the crazy witch "speaker of the house" Nancy Peloski as she would be next in line if no decision is made by that date. Of course we all know the DEMONcrats are planning on delaying the results of the November 3rd election for those few months so she can take over.

They know Biden can't beat Trump in a fair election so they must cheat every way the can. Since the mail-in voting plan seems to be backfiring on them the next plan is to stage another False Flag event, which could still happen on October 19th, just a few weeks before the election. This would be the last attempt by the satanists to prevent people for going to vote.

I pray this doesn't happen but it's lining up perfectly with that last top in the market right before that event, and the recent FP I have shows a low on the SPX that is indeed lower then the March 23rd low. So if it's real (and I think it is) we are going to crash 40%+ and it can be blamed on the False Flag of course. God help us all and protect President Trump and family. And please God protect Attorney General William Barr as he has all the evidence to bring down the entire Deep State satanists.