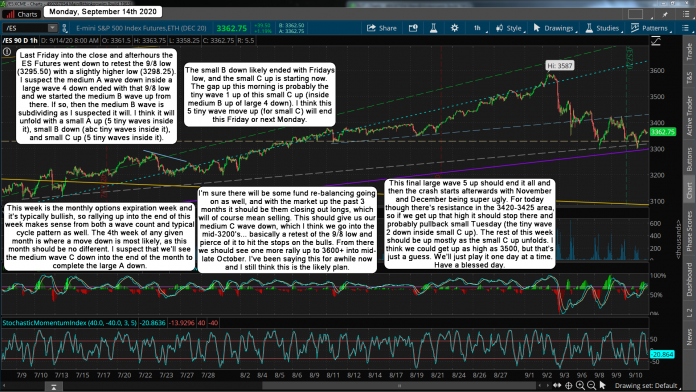 The small B down likely ended with Fridays low, and the small C up is starting now. The gap up this morning is probably the tiny wave 1 up of this small C up (inside medium B up of large 4 down). I think this 5 tiny wave move up (for small C) will end this Friday or next Monday.

This week is the monthly options expiration week and it's typically bullish, so rallying up into the end of this week makes sense from both a wave count and typical cycle pattern as well. The 4th week of any given month is where a move down is most likely, as this month should be no different. I suspect that we'll see the medium wave C down into the end of the month to complete the large A down.

I'm sure there will be some fund re-balancing going on as well, and with the market up the past 3 months it should be them closing out longs, which will of course mean selling. This should give us our medium C wave down, which I think we go into the mid-3200's... basically a retest of the 9/8 low and pierce of it to hit the stops on the bulls. From there we should see one more rally up to 3600+ into mid-late October. I've been saying this for awhile now and I still think this is the likely plan.

This final large wave 5 up should end it all and then the crash starts afterwards with November and December being super ugly. For today though there's resistance in the 3420-3425 area, so if we get up that high it should stop there and probably pullback small Tuesday (the tiny wave 2 down inside small C up). The rest of this week should be up mostly as the small C up unfolds. I think we could get up as high as 3500, but that's just a guess. We'll just play it one day at a time. Have a blessed day.