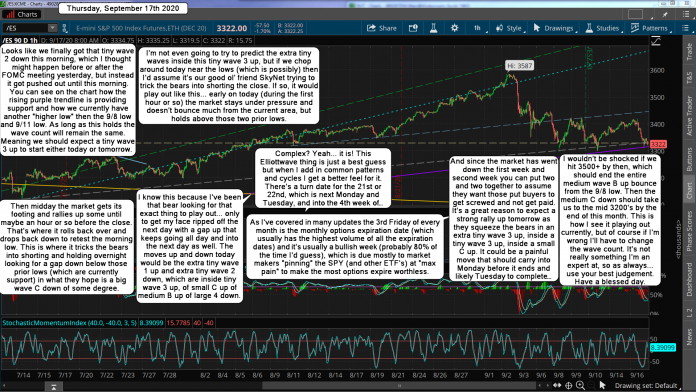 Looks like we finally got that tiny wave 2 down this morning, which I thought might happen before or after the FOMC meeting yesterday, but instead it got pushed out until this morning. You can see on the chart how the rising purple trendline is providing support and how we currently have another "higher low" then the 9/8 low and 9/11 low. As long as this holds the wave count will remain the same. Meaning we should expect a tiny wave 3 up to start either today or tomorrow.

I'm not even going to try to predict the extra tiny waves inside this tiny wave 3 up, but if we chop around today near the lows (which is possibly) then I'd assume it's our good ol' friend SkyNet trying to trick the bears into shorting the close. If so, it would play out like this... early on today (during the first hour or so) the market stays under pressure and doesn't bounce much from the current area, but holds above those two prior lows.

Then midday the market gets its footing and rallies up some until maybe an hour or so before the close. That's where it rolls back over and drops back down to retest the morning low. This is where it tricks the bears into shorting and holding overnight looking for a gap down below those prior lows (which are currently support) in what they hope is a big wave C down of some degree.

I know this because I've been that bear looking for that exact thing to play out... only to get my face ripped off the next day with a gap up that keeps going all day and into the next day as well. The moves up and down today would be the extra tiny wave 1 up and extra tiny wave 2 down, which are inside tiny wave 3 up, of small C up of medium B up of large 4 down.

Complex? Yeah... it is! This Elliottwave thing is just a best guess but when I add in common patterns and cycles I get a better feel for it. There's a turn date for the 21st or 22nd, which is next Monday and Tuesday, and into the 4th week of the month.

As I've covered in many updates the 3rd Friday of every month is the monthly options expiration date (which usually has the highest volume of all the expiration dates) and it's usually a bullish week (probably 80% of the time I'd guess), which is due mostly to market makers "pinning" the SPY (and other ETF's) at "max pain" to make the most options expire worthless.

And since the market has went down the first week and second week you can put two and two together to assume they want those put buyers to get screwed and not get paid. It's a great reason to expect a strong rally up tomorrow as they squeeze the bears in an extra tiny wave 3 up, inside a tiny wave 3 up, inside a small C up. It could be a painful move that should carry into Monday before it ends and likely Tuesday to complete the smaller 4's and 5's of that pattern, which aligns perfectly with the turn dates.

I wouldn't be shocked if we hit 3500+ by then, which should end the entire medium wave B up bounce from the 9/8 low. Then the medium C down should take us to the mid 3200's by the end of this month. This is how I see it playing out currently, but of course if I'm wrong I'll have to change the wave count. It's not really something I'm an expert at, so as always... use your best judgement. Have a blessed day.