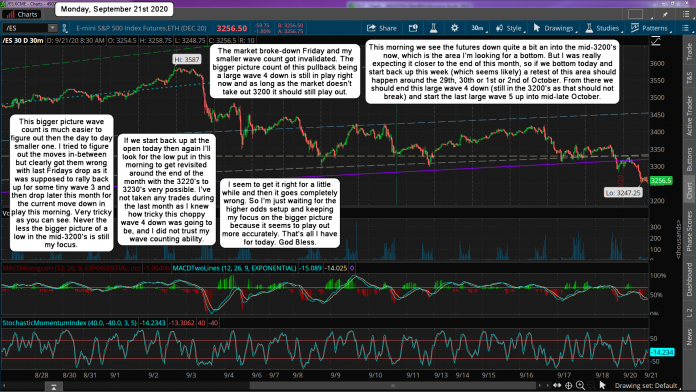 The market broke-down Friday and my smaller wave count got invalidated. The bigger picture count of this pullback being a large wave 4 down is still in play right now and as long as the market doesn't take out 3200 it should still play out.

This morning we see the futures down quite a bit an into the mid-3200's now, which is the area I'm looking for a bottom. But I was really expecting it closer to the end of this month, so if we bottom today and start back up this week (which seems likely) a retest of this area should happen around the 29th, 30th or 1st or 2nd of October. From there we should end this large wave 4 down (still in the 3200's as that should not break) and start the last large wave 5 up into mid-late October.

This bigger picture wave count is much easier to figure out then the day to day smaller one. I tried to figure out the moves in-between but clearly got them wrong with last Fridays drop as it was supposed to rally back up for some tiny wave 3 and then drop later this month for the current move down in play this morning. Very tricky as you can see. Never the less the bigger picture of a low in the mid-3200's is still my focus.

If we start back up at the open today then again I'll look for the low put in this morning to get revisited around the end of the month with the 3220's to 3230's very possible. I've not taken any trades during the last month as I knew how tricky this choppy wave 4 down was going to be, and I did not trust my wave counting ability.

I seem to get it right for a little while and then it goes completely wrong. So I'm just waiting for the higher odds setup and keeping my focus on the bigger picture because it seems to play out more accurately. That's all I have for today. God Bless.