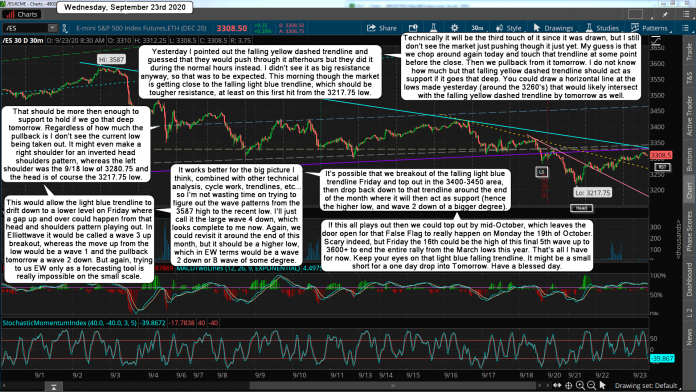 Yesterday I pointed out the falling yellow dashed trendline and guessed that they would push through it afterhours but they did it during the normal hours instead. I didn't see it as big resistance anyway, so that was to be expected. This morning though the market is getting close to the falling light blue trendline, which should be tougher resistance, at least on this first hit from the 3217.75 low.

Technically it will be the third touch of it since it was drawn, but I still don't see the market just pushing though it just yet. My guess is that we chop around again today and touch that trendline at some point before the close. Then we pullback from it tomorrow. I do not know how much but that falling yellow dashed trendline should act as support if it goes that deep. You could draw a horizontal line at the lows made yesterday (around the 3260's) that would likely intersect with the falling yellow dashed trendline by tomorrow as well.

That should be more then enough to support to hold if we go that deep tomorrow. Regardless of how much the pullback is I don't see the current low being taken out. It might even make a right shoulder for an inverted head shoulders pattern, whereas the left shoulder was the 9/18 low of 3280.75 and the head is of course the 3217.75 low.

This would allow the light blue trendline to drift down to a lower level on Friday where a gap up and over could happen from that head and shoulders pattern playing out. In Elliottwave it would be called a wave 3 up breakout, whereas the move up from the low would be a wave 1 and the pullback tomorrow a wave 2 down. But again, trying to us EW only as a forecasting tool is really impossible on the small scale.

It works better for the big picture I think, combined with other technical analysis, cycle work, trendlines, etc... so I'm not wasting time on trying to figure out the wave patterns from the 3587 high to the recent low. I'll just call it the large wave 4 down, which looks complete to me now. Again, we could revisit it around the end of this month, but it should be a higher low, which in EW terms would be a wave 2 down or B wave of some degree.

It's possible that we breakout of the falling light blue trendline Friday and top out in the 3400-3450 area, then drop back down to that trendline around the end of the month where it will then act as support (hence the higher low, and wave 2 down of a bigger degree).

If this all plays out then we could top out by mid-October, which leaves the door open for that False Flag to really happen on Monday the 19th of October. Scary indeed, but Friday the 16th could be the high of this final 5th wave up to 3600+ to end the entire rally from the March lows this year. That's all I have for now. Keep your eyes on that light blue falling trendline. It might be a small short for a one day drop into Tomorrow. Have a blessed day.