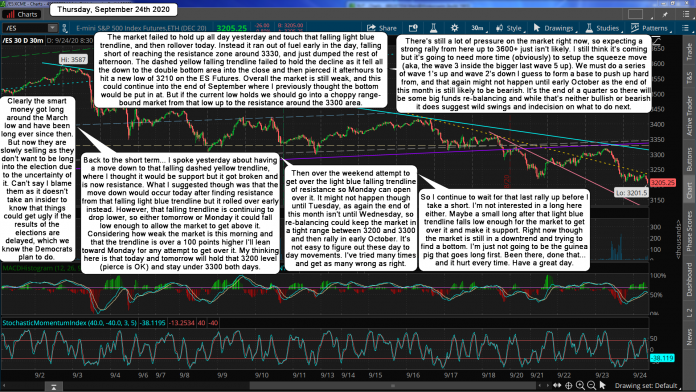 The market failed to hold up all day yesterday and touch that falling light blue trendline, and then rollover today. Instead it ran out of fuel early in the day, falling short of reaching the resistance zone around 3330, and just dumped the rest of afternoon. The dashed yellow falling trendline failed to hold the decline as it fell all the down to the double bottom area into the close and then pierced it afterhours to hit a new low of 3210 on the ES Futures. Overall the market is still weak, and this could continue into the end of September where I previously thought the bottom would be put in at. But if the current low holds we should go into a choppy range-bound market from that low up to the resistance around the 3300 area.

There's still a lot of pressure on the market right now, so expecting a strong rally from here up to 3600+ just isn't likely. I still think it's coming but it's going to need more time (obviously) to setup the squeeze move (aka, the wave 3 inside the bigger last wave 5 up). We must do a series of wave 1's up and wave 2's down I guess to form a base to push up hard from, and that again might not happen until early October as the end of this month is still likely to be bearish. It's the end of a quarter so there will be some big funds re-balancing and while that's neither bullish or bearish it does suggest wild swings and indecision on what to do next.

Clearly the smart money got long around the March low and have been long ever since then. But now they are slowly selling as they don't want to be long into the election due to the uncertainty of it. Can't say I blame them as it doesn't take an insider to know that things could get ugly if the results of the elections are delayed, which we know the Democrats plan to do.

Back to the short term... I spoke yesterday about having a move down to that falling dashed yellow trendline, where I thought it would be support but it got broken and is now resistance. What I suggested though was that the move down would occur today after finding resistance from that falling light blue trendline but it rolled over early instead. However, that falling trendline is continuing to drop lower, so either tomorrow or Monday it could fall low enough to allow the market to get above it. Considering how weak the market is this morning and that the trendline is over a 100 points higher I'll lean toward Monday for any attempt to get over it. My thinking here is that today and tomorrow will hold that 3200 level (pierce is OK) and stay under 3300 both days.

Then over the weekend attempt to get over the light blue falling trendline of resistance so Monday can open over it. It might not happen though until Tuesday, as again the end of this month isn't until Wednesday, so re-balancing could keep the market in a tight range between 3200 and 3300 and then rally in early October. It's not easy to figure out these day to day movements. I've tried many times and get as many wrong as right.

So I continue to wait for that last rally up before I take a short. I'm not interested in a long here either. Maybe a small long after that light blue trendline falls low enough for the market to get over it and make it support. Right now though the market is still in a downtrend and trying to find a bottom. I'm just not going to be the guinea pig that goes long first. Been there, done that... and it hurt every time. Have a great day.