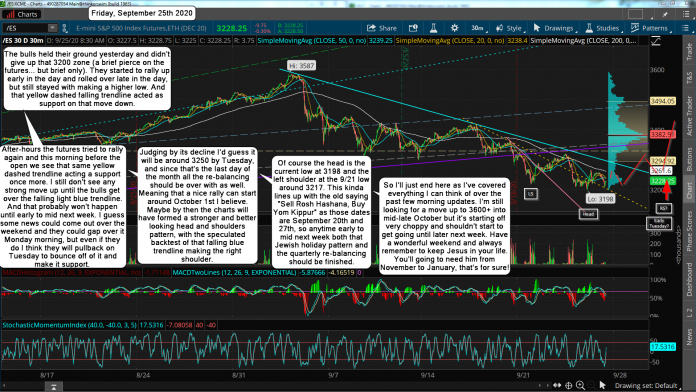 The bulls held their ground yesterday and didn't give up that 3200 zone (a brief pierce on the futures... but brief only). They started to rally up early in the day and rolled over late in the day, but still stayed with making a higher low. And that yellow dashed falling trendline acted as support on that move down.

After-hours the futures tried to rally again and this morning before the open we see that same yellow dashed trendline acting a support once more. I still don't see any strong move up until the bulls get over the falling light blue trendline. And that probably won't happen until early to mid next week. I guess some news could come out over the weekend and they could gap over it Monday morning, but even if they do I think they will pullback on Tuesday to bounce off of it and make it support.

Judging by its decline I'd guess it will be around 3250 by Tuesday, and since that's the last day of the month all the re-balancing should be over with as well. Meaning that a nice rally can start around October 1st I believe. Maybe by then the charts will have formed a stronger and better looking head and shoulders pattern, with the speculated backtest of that falling blue trendline making the right shoulder.

Of course the head is the current low at 3198 and the left shoulder at the 9/21 low around 3217. This kinda lines up with the old saying "Sell Rosh Hashana, Buy Yom Kippur" as those dates are September 20th and 27th, so anytime early to mid next week both that Jewish holiday pattern and the quarterly re-balancing should be finished.

So I'll just end here as I've covered everything I can think of over the past few morning updates. I'm still looking for a move up to 3600+ into mid-late October but it's starting off very choppy and shouldn't start to get going until later next week. Have a wonderful weekend and always remember to keep Jesus in your life. You'll going to need him from November to January, that's for sure!