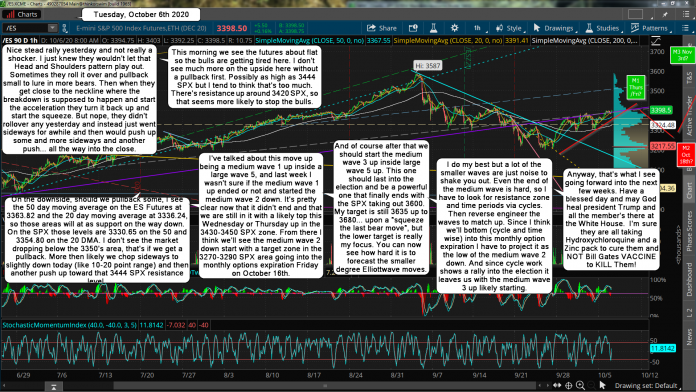 Nice stead rally yesterday and not really a shocker. I just knew they wouldn't let that Head and Shoulders pattern play out. Sometimes they roll it over and pullback small to lure in more bears. Then when they get close to the neckline where the breakdown is supposed to happen and start the acceleration they turn it back up and start the squeeze. But nope, they didn't rollover any yesterday and instead just went sideways for awhile and then would push up some and more sideways and another push... all the way into the close.

This morning we see the futures about flat so the bulls are getting tired here. I don't see much more on the upside here without a pullback first. Possibly as high as 3444 SPX but I tend to think that's too much. There's resistance up around 3420 SPX, so that seems more likely to stop the bulls.

And of course after that we should start the medium wave 3 up inside large wave 5 up. This one should last into the election and be a powerful one that finally ends with the SPX taking out 3600. My target is still 3635 up to 3680... upon a "squeeze the last bear move", but the lower target is really my focus. You can now see how hard it is to forecast the smaller degree Elliottwave moves.

I do my best but a lot of the smaller waves are just noise to shake you out. Even the end of the medium wave is hard, so I have to look for resistance zone and time periods via cycles. Then reverse engineer the waves to match up. Since I think we'll bottom (cycle and time wise) into this monthly option expiration I have to project it as the low of the medium wave 2 down. And since cycle work shows a rally into the election it leaves us with the medium wave 3 up likely starting.

Anyway, that's what I see going forward into the next few weeks. Have a blessed day and may God heal president Trump and all the member's there at the White House.  I'm sure they are all taking Hydroxychloroquine and a Zinc pack to cure them and NOT Bill Gates VACCINE to KILL Them!