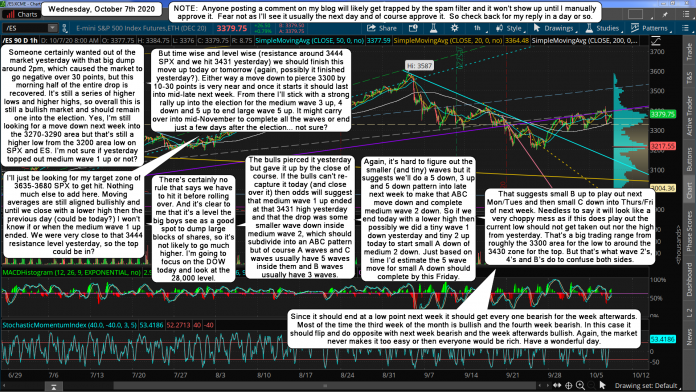 Someone certainly wanted out of the market yesterday with that big dump around 2pm, which caused the market to go negative over 30 points, but this morning half of the entire drop is recovered. It's still a series of higher lows and higher highs, so overall this is still a bullish market and should remain one into the election. Yes, I'm still looking for a move down next week into the 3270-3290 area but that's still a higher low from the 3200 area low on SPX and ES. I'm not sure if yesterday topped out medium wave 1 up or not?

But time wise and level wise (resistance around 3444 SPX and we hit 3431 yesterday) we should finish this move up today or tomorrow (again, possibly it finished yesterday?). Either way a move down to pierce 3300 by 10-30 points is very near and once it starts it should last into mid-late next week. From there I'll stick with a strong rally up into the election for the medium wave 3 up, 4 down and 5 up to end large wave 5 up. It might carry over into mid-November to complete all the waves or end just a few days after the election... not sure?

I'll just be looking for my target zone of 3635-3680 SPX to get hit. Nothing much else to add here. Moving averages are still aligned bullishly and until we close with a lower high then the previous day (could be today?) I won't know if or when the medium wave 1 up ended. We were very close to that 3444 resistance level yesterday, so the top could be in?

There's certainly no rule that says we have to hit it before rolling over. And it's clear to me that it's a level the big boys see as a good spot to dump large blocks of shares, so it's not likely to go much higher. I'm going to focus on the DOW today and look at the 28,000 level.

The bulls pierced it yesterday but gave it up by the close of course. If the bulls can't re-capture it today (and close over it) then odds will suggest that medium wave 1 up ended at that 3431 high yesterday and that the drop was some smaller wave down inside medium wave 2, which should subdivide into an ABC pattern but of course A waves and C waves usually have 5 waves inside them and B waves usually have 3 waves.

Again, it's hard to figure out the smaller (and tiny) waves but it suggests we'll do a 5 down, 3 up and 5 down pattern into late next week to make that ABC move down and complete medium wave 2 down. So if we end today with a lower high then possibly we did a tiny wave 1 down yesterday and tiny 2 up today to start small A down of medium 2 down. Just based on time I'd estimate the 5 wave move for small A down should complete by this Friday.

That suggests small B up to play out next Mon/Tues and then small C down into Thurs/Fri of next week. Needless to say it will look like a very choppy mess as if this does play out the current low should not get taken out nor the high from yesterday. That's a big trading range from roughly the 3300 area for the low to around the 3430 zone for the top. But that's what wave 2's, 4's and B's do to confuse both sides.

Banned From YouTube But I Saved A Copy... LOL!

She was later fired from her job for exposing the truth...

Out of 70,000+ positive reported COVID-19 cases on Universities: