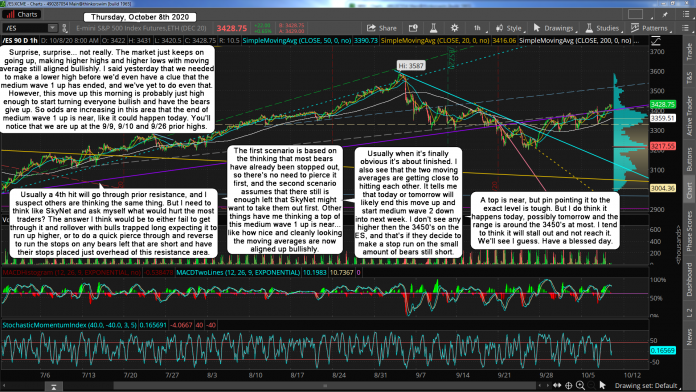 Surprise, surprise... not really. The market just keeps on going up, making higher highs and higher lows with moving average still aligned bullishly. I said yesterday that we needed to make a lower high before we'd even have a clue that the medium wave 1 up has ended, and we've yet to do even that. However, this move up this morning is probably just high enough to start turning everyone bullish and have the bears give up. So odds are increasing in this area that the end of medium wave 1 up is near, like it could happen today. You'll notice that we are up at the 9/9, 9/10 and 9/26 prior highs.

Usually a 4th hit will go through prior resistance, and I suspect others are thinking the same thing. But I need to think like SkyNet and ask myself what would hurt the most traders? The answer I think would be to either fail to get through it and rollover with bulls trapped long expecting it to run up higher, or to do a quick pierce through and reverse to run the stops on any bears left that are short and have their stops placed just overhead of this resistance area.

The first scenario is based on the thinking that most bears have already been stopped out, so there's no need to pierce it first, and the second scenario assumes that there still is enough left that SkyNet might want to take them out first. Other things have me thinking a top of this medium wave 1 up is near... like how nice and cleanly looking the moving averages are now aligned up bullishly.

Usually when it's finally obvious it's about finished. I also see that the two moving averages are getting close to hitting each other. It tells me that today or tomorrow will likely end this move up and start medium wave 2 down into next week. I don't see any higher then the 3450's on the ES, and that's if they decide to make a stop run on the small amount of bears still short.

A top is near, but pin pointing it to the exact level is tough. But I do think it happens today, possibly tomorrow and the range is around the 3450's at most. I tend to think it will stall out and not reach it. We'll see I guess. Have a blessed day.