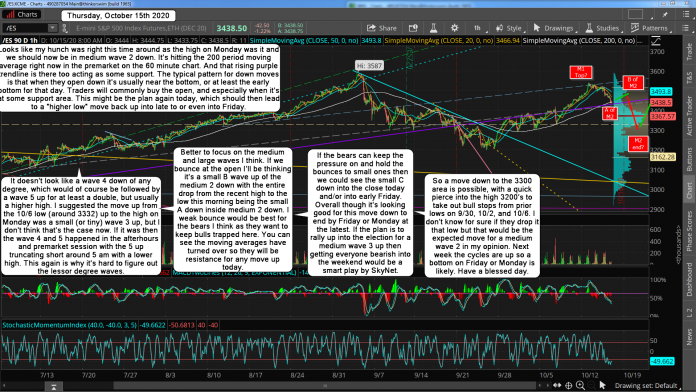 Looks like my hunch was right this time around as the high on Monday was it and we should now be in medium wave 2 down. It's hitting the 200 period moving average right now in the premarket on the 60 minute chart. And that rising purple trendline is there too acting as some support. The typical pattern for down moves is that when they open down it's usually near the bottom, or at least the early bottom for that day. Traders will commonly buy the open, and especially when it's at some support area. This might be the plan again today, which should then lead to a "higher low" move back up into late to or even into Friday.

It doesn't look like a wave 4 down of any degree, which would of course be followed by a wave 5 up for at least a double, but usually a higher high. I suggested the move up from the 10/6 low (around 3332) up to the high on Monday was a small (or tiny) wave 3 up, but I don't think that's the case now. If it was then the wave 4 and 5 happened in the afterhours and premarket session with the 5 up truncating short around 5 am with a lower high. This again is why it's hard to figure out the lessor degree waves.

Better to focus on the medium and large waves I think. If we bounce at the open I'll be thinking it's a small B wave up of the medium 2 down with the entire drop from the recent high to the low this morning being the small A down inside medium 2 down. I weak bounce would be best for the bears I think as they want to keep bulls trapped here. You can see the moving averages have turned over so they will be resistance for any move up today.

If the bears can keep the pressure on and hold the bounces to small ones then we could see the small C down into the close today and/or into early Friday. Overall though it's looking good for this move down to end by Friday or Monday at the latest. If the plan is to rally up into the election for a medium wave 3 up then getting everyone bearish into the weekend would be a smart play by SkyNet.

So a move down to the 3300 area is possible, with a quick pierce into the high 3200's to take out bull stops from prior lows on 9/30, 10/2, and 10/6. I don't know for sure if they drop it that low but that would be the expected move for a medium wave 2 in my opinion. Next week the cycles are up so a bottom on Friday or Monday is likely. Have a blessed day.