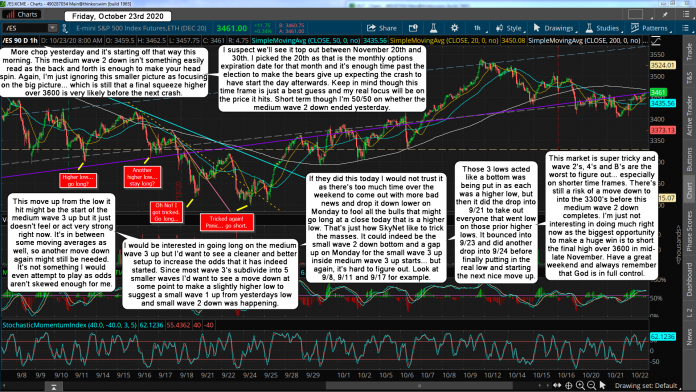 More chop yesterday and it's starting off that way this morning. This medium wave 2 down isn't something easily read as the back and forth is enough to make your head spin. Again, I'm just ignoring this smaller picture as focusing on the big picture... which is still that a final squeeze higher over 3600 is very likely before the next crash.

I suspect we'll see it top out between November 20th and 30th. I picked the 20th as that is the monthly options expiration date for that month and it's enough time past the election to make the bears give up expecting the crash to have start the day afterwards. Keep in mind though this time frame is just a best guess and my real focus will be on the price it hits. Short term though I'm 50/50 on whether the medium wave 2 down ended yesterday.

This move up from the low it hit might be the start of the medium wave 3 up but it just doesn't feel or act very strong right now. It's in between some moving averages as well, so another move down again might still be needed. It's not something I would even attempt to play as odds aren't skewed enough for me.

I would be interested in going long on the medium wave 3 up but I'd want to see a cleaner and better setup to increase the odds that it has indeed started. Since most wave 3's subdivide into 5 smaller waves I'd want to see a move down at some point to make a slightly higher low to suggest a small wave 1 up from yesterdays low and small wave 2 down was happening.

If they did this today I would not trust it as there's too much time over the weekend to come out with more bad news and drop it down lower on Monday to fool all the bulls that might go long at a close today that is a higher low. That's just how SkyNet like to trick the masses. It could indeed be the small wave 2 down bottom and a gap up on Monday for the small wave 3 up inside medium wave 3 up starts... but again, it's hard to figure out. Look at 9/8, 9/11 and 9/17 for example.

Those 3 lows acted like a bottom was being put in as each was a higher low, but then it did the drop into 9/21 to take out everyone that went low on those prior higher lows. It bounced into 9/23 and did another drop into 9/24 before finally putting in the real low and starting the next nice move up.

This market is super tricky and wave 2's, 4's and B's are the worst to figure out... especially on shorter time frames. There's still a risk of a move down to into the 3300's before this medium wave 2 down completes. I'm just not interesting in doing much right now as the biggest opportunity to make a huge win is to short the final high over 3600 in mid-late November. Have a great weekend and always remember that God is in full control.