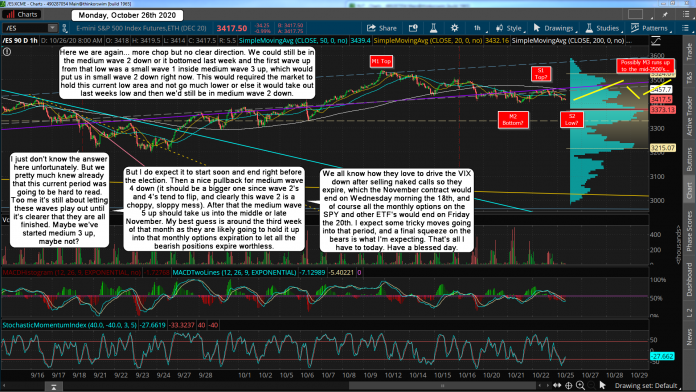 I just don't know the answer here unfortunately. But we pretty much knew already that this current period was going to be hard to read. Too me it's still about letting these waves play out until it's clearer that they are all finished. Maybe we've started medium 3 up, maybe not?

But I do expect it to start soon and end right before the election. Then a nice pullback for medium wave 4 down (it should be a bigger one since wave 2's and 4's tend to flip, and clearly this wave 2 is a choppy, sloppy mess). After that the medium wave 5 up should take us into the middle or late November. My best guess is around the third week of that month as they are likely going to hold it up into that monthly options expiration to let all the bearish positions expire worthless.

We all know how they love to drive the VIX down after selling naked calls so they expire, which the November contract would end on Wednesday morning the 18th, and of course all the monthly options on the SPY and other ETF's would end on Friday the 20th. I expect some tricky moves going into that period, and a final squeeze on the bears is what I'm expecting. That's all I have to today. Have a blessed day.