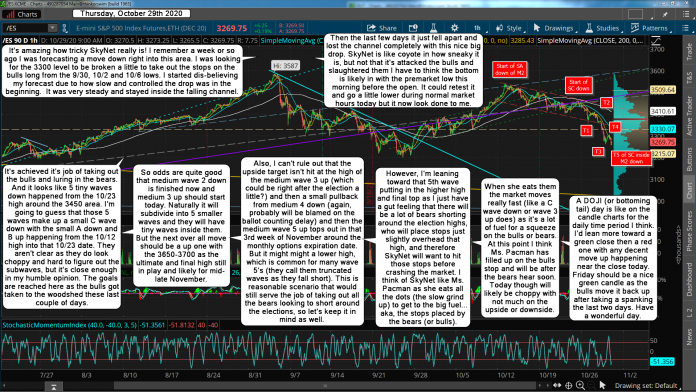 It's amazing how tricky SkyNet really is! I remember a week or so ago I was forecasting a move down right into this area. I was looking for the 3300 level to be broken a little to take out the stops on the bulls long from the 9/30, 10/2 and 10/6 lows. I started dis-believing my forecast due to how slow and controlled the drop was in the beginning.  It was very steady and stayed inside the falling channel.

Then the last few days it just fell apart and lost the channel completely with this nice big drop. SkyNet is like coyote in how sneaky it is, but not that it's attacked the bulls and slaughtered them I have to think the bottom is likely in with the premarket low this morning before the open. It could retest it and go a little lower during normal market hours today but it now look done to me.

It's achieved it's job of taking out the bulls and luring in the bears. And it looks like 5 tiny waves down happened from the 10/23 high around the 3450 area. I'm going to guess that those 5 waves make up a small C wave down with the small A down and B up happening from the 10/12 high into that 10/23 date. They aren't clear as they do look choppy and hard to figure out the subwaves, but it's close enough in my humble opinion. The goals are reached here as the bulls got taken to the woodshed these last couple of days.

So odds are quite good that medium wave 2 down is finished now and medium 3 up should start today. Naturally it will subdivide into 5 smaller waves and they will have tiny waves inside them. But the next over all move should be a up one with the 3650-3700 as the ultimate and final high still in play and likely for mid-late November.

Also, I can't rule out that the upside target isn't hit at the high of the medium wave 3 up (which could be right after the election a little?) and then a small pullback from medium 4 down (again, probably will be blamed on the ballot counting delay) and then the medium wave 5 up tops out in that 3rd week of November around the monthly options expiration date. But it might might a lower high, which is common for many wave 5's (they call them truncated waves as they fall short). This is reasonable scenario that would still serve the job of taking out all the bears looking to short around the elections, so let's keep it in mind as well.

However, I'm leaning toward that 5th wave putting in the higher high and final top as I just have a gut feeling that there will be a lot of bears shorting around the election highs, who will place stops just slightly overhead that high, and therefore SkyNet will want to hit those stops before crashing the market. I think of SkyNet like Ms. Pacman as she eats all the dots (the slow grind up) to get to the big fuel... aka, the stops placed by the bears (or bulls).

When she eats them the market moves really fast (like a C wave down or wave 3 up does) as it's a lot of fuel for a squeeze on the bulls or bears. At this point I think Ms. Pacman has filled up on the bulls stop and will be after the bears hear soon. Today though will likely be choppy with not much on the upside or downside.

A DOJI (or bottoming tail) day is like on the candle charts for the daily time period I think. I'd lean more toward a green close then a red one with any decent move up happening near the close today. Friday should be a nice green candle as the bulls move it back up after taking a spanking the last two days. Have a wonderful day.