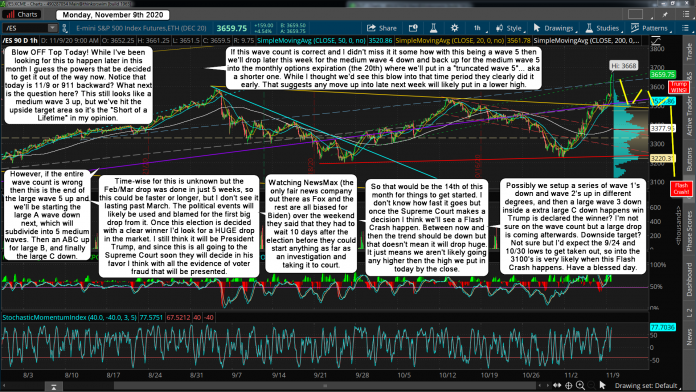 Blow OFF Top Today! While I've been looking for this to happen later in this month I guess the powers that be decided to get it out of the way now. Notice that today is 11/9 or 911 backward? What next is the question here? This still looks like a medium wave 3 up, but we've hit the upside target area so it's the "Short of a Lifetime" in my opinion.

If this wave count is correct and I didn't miss it it some how with this being a wave 5 then we'll drop later this week for the medium wave 4 down and back up for the medium wave 5 into the monthly options expiration (the 20th) where we'll put in a "truncated wave 5"... aka a shorter one. While I thought we'd see this blow into that time period they clearly did it early. That suggests any move up into late next week will likely put in a lower high.

However, if the entire wave count is wrong then this is the end of the large wave 5 up and we'll be starting the large A wave down next, which will subdivide into 5 medium waves. Then an ABC up for large B, and finally the large C down.

Time-wise for this is unknown but the Feb/Mar drop was done in just 5 weeks, so this could be faster or longer, but I don't see it lasting past March. The political events will likely be used and blamed for the first big drop from it. Once this election is decided with a clear winner I'd look for a HUGE drop in the market. I still think it will be President Trump, and since this is all going to the Supreme Court soon they will decide in his favor I think with all the evidence of voter fraud that will be presented.

Watching NewsMax (the only fair news company out there as Fox and the rest are all biased for Biden) over the weekend they said that they had to wait 10 days after the election before they could start anything as far as an investigation and taking it to court.

So that would be the 14th of this month for things to get started. I don't know how fast it goes but once the Supreme Court makes a decision I think we'll see a Flash Crash happen. Between now and then the trend should be down but that doesn't mean it will drop huge. It just means we aren't likely going any higher then the high we put in today by the close.

Possibly we setup a series of wave 1's down and wave 2's up in different degrees, and then a large wave 3 down inside a extra large C down happens win Trump is declared the winner? I'm not sure on the wave count but a large drop is coming afterwards. Downside target? Not sure but I'd expect the 9/24 and 10/30 lows to get taken out, so into the 3100's is very likely when this Flash Crash happens. Have a blessed day.