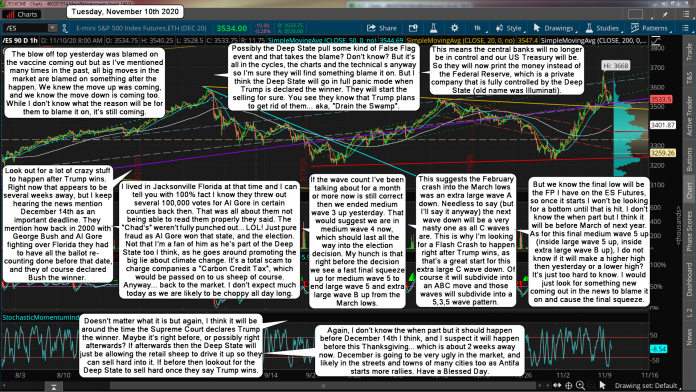 The blow off top yesterday was blamed on the vaccine coming out but as I've mentioned many times in the past, all big moves in the market are blamed on something after the happen. We knew the move up was coming, and we know the move down is coming too. While I don't know what the reason will be for them to blame it on, it's still coming. 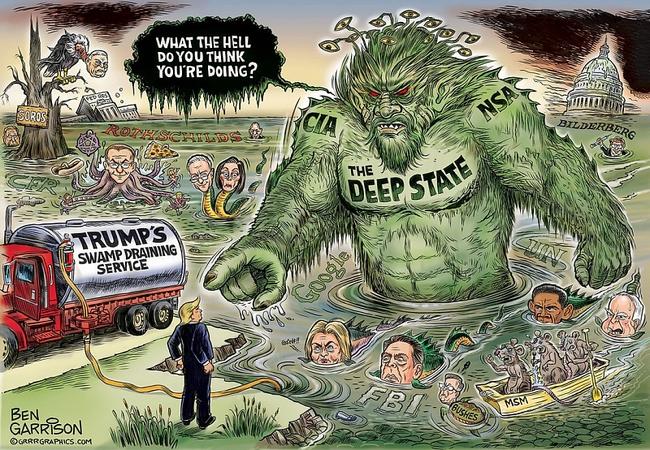 Possibly the Deep State pull some kind of False Flag event and that takes the blame? Don't know? But it's all in the cycles, the charts and the technical s anyway so I'm sure they will find something blame it on. But I think the Deep State will go in full panic mode when Trump is declared the winner. They will start the selling for sure. You see they know that Trump plans to get rid of them... aka, "Drain the Swamp".

This means the central banks will no longer be in control and our US Treasury will be. So they will now print the money instead of the Federal Reserve, which is a private company that is fully controlled by the Deep State (old name was Illuminati).

Look out for a lot of crazy stuff to happen after Trump wins. Right now that appears to be several weeks away, but I keep hearing the news mention December 14th as an important deadline. They mention how back in 2000 with George Bush and Al Gore fighting over Florida they had to have all the ballot re-counting done before that date, and they of course declared Bush the winner.

I lived in Jacksonville Florida at that time and I can tell you with 100% fact I know they threw out several 100,000 votes for Al Gore in certain counties back then. That was all about them not being able to read them properly they said. The "Chad's" weren't fully punched out... LOL! Just pure fraud as Al Gore won that state, and the election. Not that I'm a fan of him as he's part of the Deep State too I think, as he goes around promoting the big lie about climate change. It's a total scam to charge companies a "Carbon Credit Tax", which would be passed on to us sheep of course. Anyway... back to the market. I don't expect much today as we are likely to be choppy all day long.

If the wave count I've been talking about for a month or more now is still correct then we ended medium wave 3 up yesterday. That would suggest we are in medium wave 4 now, which should last all the way into the election decision. My hunch is that right before the decision we see a fast final squeeze up for medium wave 5 to end large wave 5 and extra large wave B up from the March lows.

This suggests the February crash into the March lows was an extra large wave A down. Needless to say (but I'll say it anyway) the next wave down will be a very nasty one as all C waves are. This is why I'm looking for a Flash Crash to happen right after Trump wins, as that's a great start for this extra large C wave down. Of course it will subdivide into an ABC move and those waves will subdivide into a 5,3,5 wave pattern.

But we know the final low will be the FP I have on the ES Futures, so once it starts I won't be looking for a bottom until that is hit. I don't know the when part but I think it will be before March of next year. As for this final medium wave 5 up (inside large wave 5 up, inside extra large wave B up), I do not know if it will make a higher high then yesterday or a lower high? It's just too hard to know. I would just look for something new coming out in the news to blame it on and cause the final squeeze.

Doesn't matter what it is but again, I think it will be around the time the Supreme Court declares Trump the winner. Maybe it's right before, or possibly right afterwards? If afterwards then the Deep State will just be allowing the retail sheep to drive it up so they can sell hard into it. If before then lookout for the Deep State to sell hard once they say Trump wins.

Again, I don't know the when part but it should happen before December 14th I think, and I suspect it will happen before this Thanksgiving... which is about 2 weeks away now. December is going to be very ugly in the market, and likely in the streets and towns of many cities too as Antifa starts more rallies. Have a Blessed Day.