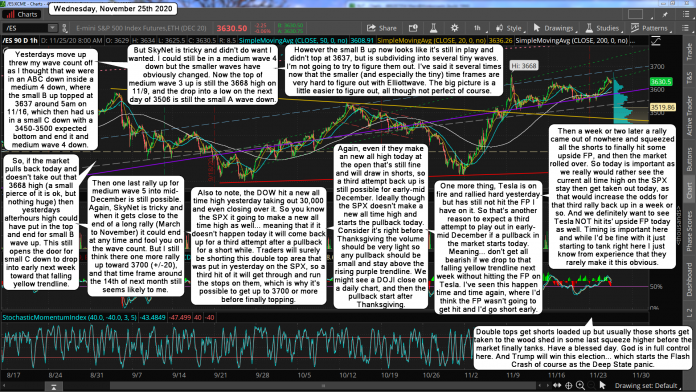 Yesterdays move up threw my wave count off as I thought that we were in an ABC down inside a medium 4 down, where the small B up topped at 3637 around 5am on 11/16, which then had us in a small C down with a 3450-3500 expected bottom and end it and medium wave 4 down.

But SkyNet is tricky and didn't do want I wanted. I could still be in a medium wave 4 down but the smaller waves have obviously changed. Now the top of medium wave 3 up is still the 3668 high on 11/9, and the drop into a low on the next day of 3506 is still the small A wave down.

However the small B up now looks like it's still in play and didn't top at 3637, but is subdividing into several tiny waves. I'm not going to try to figure them out. I've said it several times now that the smaller (and especially the tiny) time frames are very hard to figure out with Elliottwave. The big picture is a little easier to figure out, all though not perfect of course.

So, if the market pulls back today and doesn't take out that 3668 high (a small pierce of it is ok, but nothing huge) then yesterdays afterhours high could have put in the top and end for small B wave up. This still opens the door for small C down to drop into early next week toward that falling yellow trendline.

Then one last rally up for medium wave 5 into mid-December is still possible. Again, SkyNet is tricky and when it gets close to the end of a long rally (March to November) it could end at any time and fool you on the wave count. But I still think there one more rally up toward 3700 (+/-20), and that time frame around the 14th of next month still seems likely to me.

Also to note, the DOW hit a new all time high yesterday taking out 30,000 and even closing over it. So you know the SPX it going to make a new all time high as well... meaning that if it doesn't happen today it will come back up for a third attempt after a pullback for a short while. Traders will surely be shorting this double top area that was put in yesterday on the SPX, so a third hit of it will get through and run the stops on them, which is why it's possible to get up to 3700 or more before finally topping.

Again, even if they make an new all high today at the open that's still fine and will draw in shorts, so a third attempt back up is still possible for early-mid December. Ideally though the SPX doesn't make a new all time high and starts the pullback today. Consider it's right before Thanksgiving the volume should be very light so any pullback should be small and stay above the rising purple trendline. We might see a DOJI close on a daily chart, and then the pullback start after Thanksgiving.

One more thing, Tesla is on fire and rallied hard yesterday but has still not hit the FP I have on it. So that's another reason to expect a third attempt to play out in early-mid December if a pullback in the market starts today. Meaning... don't get all bearish if we drop to that falling yellow trendline next week without hitting the FP on Tesla. I've seen this happen time and time again, where I'd think the FP wasn't going to get hit and I'd go short early.

Then a week or two later a rally came out of nowhere and squeezed all the shorts to finally hit some upside FP, and then the market rolled over. So today is important as we really would rather see the current all time high on the SPX stay then get taken out today, as that would increase the odds for that third rally back up in a week or so. And we definitely want to see Tesla NOT hit its' upside FP today as well. Timing is important here and while I'd be fine with it just starting to tank right here I just know from experience that they rarely make it this obvious.

Double tops get shorts loaded up but usually those shorts get taken to the wood shed in some last squeeze higher before the market finally tanks. Have a blessed day. God is in full control here. And Trump will win this election... which starts the Flash Crash of course as the Deep State panic.