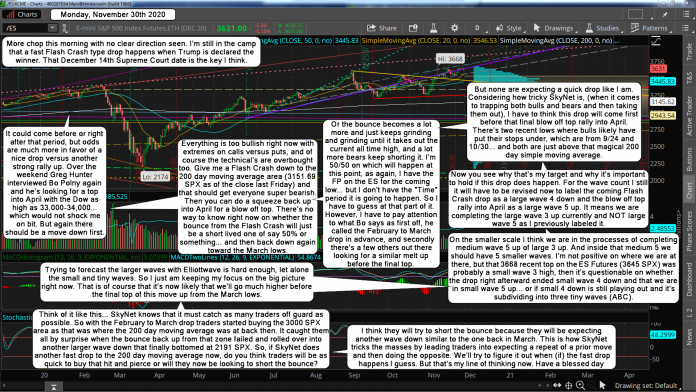 More chop this morning with no clear direction seen. I'm still in the camp that a fast Flash Crash type drop happens when Trump is declared the winner. That December 14th Supreme Court date is the key I think.

It could come before or right after that period, but odds are much more in favor of a nice drop versus another strong rally up. Over the weekend Greg Hunter interviewed Bo Polny again and he's looking for a top into April with the Dow as high as 33,000-34,000... which would not shock me on bit. But again there should be a move down first.

Everything is too bullish right now with extremes on calls versus puts, and of course the technical's are overbought too. Give me a Flash Crash down to the 200 day moving average area (3151.69 SPX as of the close last Friday) and that should get everyone super bearish. Then you can do a squeeze back up into April for a blow off top. There's no way to know right now on whether the bounce from the Flash Crash will just be a short lived one of say 50% or something... and then back down again toward the March lows.

Or the bounce becomes a lot more and just keeps grinding and grinding until it takes out the current all time high, and a lot more bears keep shorting it. I'm 50/50 on which will happen at this point, as again, I have the FP on the ES for the coming low... but I don't have the "Time" period it is going to happen. So I have to guess at that part of it. However, I have to pay attention to what Bo says as first off, he called the February to March drop in advance, and secondly there's a few others out there looking for a similar melt up before the final top.

But none are expecting a quick drop like I am. Considering how tricky SkyNet is, (when it comes to trapping both bulls and bears and then taking them out), I have to think this drop will come first before that final blow off top rally into April. There's two recent lows where bulls likely have put their stops under, which are from 9/24 and 10/30... and both are just above that magical 200 day simple moving average.

Now you see why that's my target and why it's important to hold if this drop does happen. For the wave count I still it will have to be revised now to label the coming Flash Crash drop as a large wave 4 down and the blow off top rally into April as a large wave 5 up. It means we are completing the large wave 3 up currently and NOT large wave 5 as I previously labeled it.

On the smaller scale I think we are in the processes of completing medium wave 5 up of large 3 up. And inside that medium 5 we should have 5 smaller waves. I'm not positive on where we are at there, but that 3668 recent top on the ES Futures (3645 SPX) was probably a small wave 3 high, then it's questionable on whether the drop right afterward ended small wave 4 down and that we are in small wave 5 up... or if small 4 down is still playing out and it's subdividing into three tiny waves (ABC).

Trying to forecast the larger waves with Elliottwave is hard enough, let alone the small and tiny waves. So I just am keeping my focus on the big picture right now. That is of course that it's now likely that we'll go much higher before the final top of this move up from the March lows.

Think of it like this... SkyNet knows that it must catch as many traders off guard as possible. So with the February to March drop traders started buying the 3000 SPX area as that was where the 200 day moving average was at back then. It caught them all by surprise when the bounce back up from that zone failed and rolled over into another larger wave down that finally bottomed at 2191 SPX. So, if SkyNet does another fast drop to the 200 day moving average now, do you think traders will be as quick to buy that hit and pierce or will they now be looking to short the bounce?

I think they will try to short the bounce because they will be expecting another wave down similar to the one back in March. This is how SkyNet tricks the masses by leading traders into expecting a repeat of a prior move and then doing the opposite. We'll try to figure it out when (if) the fast drop happens I guess. But that's my line of thinking now. Have a blessed day