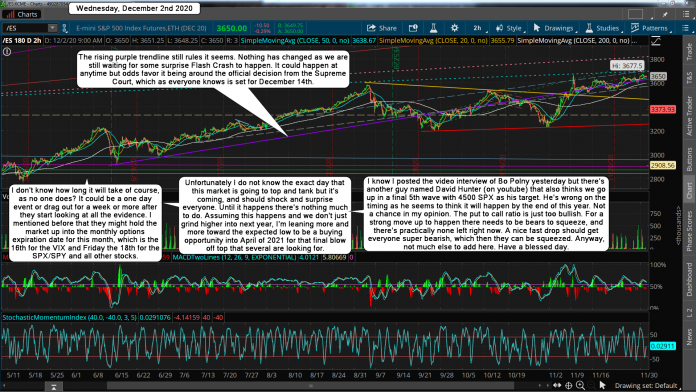 The rising purple trendline still rules it seems. Nothing has changed as we are still waiting for some surprise Flash Crash to happen. It could happen at anytime but odds favor it being around the official decision from the Supreme Court, which as everyone knows is set for December 14th.

I don't know how long it will take of course, as no one does? It could be a one day event or drag out for a week or more after they start looking at all the evidence. I mentioned before that they might hold the market up into the monthly options expiration date for this month, which is the 16th for the VIX and Friday the 18th for the SPX/SPY and all other stocks.

Unfortunately I do not know the exact day that this market is going to top and tank but it's coming, and should shock and surprise everyone. Until it happens there's nothing much to do. Assuming this happens and we don't just grind higher into next year, I'm leaning more and more toward the expected low to be a buying opportunity into April of 2021 for that final blow off top that several are looking for.

I know I posted the video interview of Bo Polny yesterday but there's another guy named David Hunter (on youtube) that also thinks we go up in a final 5th wave with 4500 SPX as his target. He's wrong on the timing as he seems to think it will happen by the end of this year. Not a chance in my opinion. The put to call ratio is just too bullish. For a strong move up to happen there needs to be bears to squeeze, and there's practically none left right now. A nice fast drop should get everyone super bearish, which then they can be squeezed. Anyway, not much else to add here. Have a blessed day.