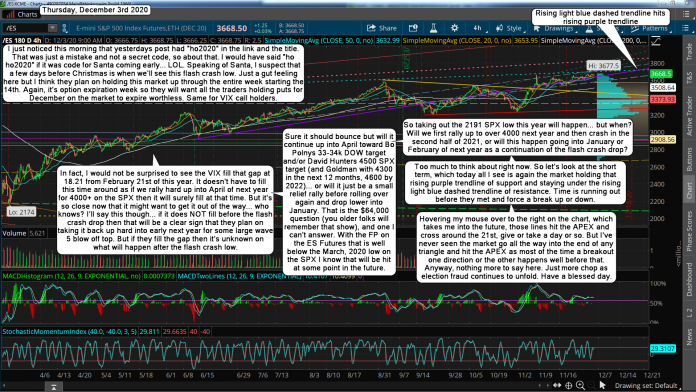 I just noticed this morning that yesterdays post had "ho2020" in the link and the title. That was just a mistake and not a secret code, so about that. I would have said "ho ho2020" if it was code for Santa coming early... LOL. Speaking of Santa, I suspect that a few days before Christmas is when we'll see this flash crash low. Just a gut feeling here but I think they plan on holding this market up through the entire week starting the 14th. Again, it's option expiration week so they will want all the traders holding puts for December on the market to expire worthless. Same for VIX call holders.

In fact, I would not be surprised to see the VIX fill that gap at 18.21 from February 21st of this year. It doesn't have to fill this time around as if we rally hard up into April of next year for 4000+ on the SPX then it will surely fill at that time. But it's so close now that it might want to get it out of the way... who knows? I'll say this though... if it does NOT fill before the flash crash drop then that will be a clear sign that they plan on taking it back up hard into early next year for some large wave 5 blow off top. But if they fill the gap then it's unknown on what will happen after the flash crash low.

Sure it should bounce but will it continue up into April toward Bo Polnys 33-34k DOW target and/or David Hunters 4500 SPX target (and Goldman with 4300 in the next 12 months, 4600 by 2022)... or will it just be a small relief rally before rolling over again and drop lower into January. That is the $64,000 question (you older folks will remember that show), and one I can't answer. With the FP on the ES Futures that is well below the March, 2020 low on the SPX I know that will be hit at some point in the future.

So taking out the 2191 SPX low this year will happen... but when? Will we first rally up to over 4000 next year and then crash in the second half of 2021, or will this happen going into January or February of next year as a continuation of the flash crash drop?

Too much to think about right now. So let's look at the short term, which today all I see is again the market holding that rising purple trendline of support and staying under the rising light blue dashed trendline of resistance. Time is running out before they met and force a break up or down.

Hovering my mouse over to the right on the chart, which takes me into the future, those lines hit the APEX and cross around the 21st, give or take a day or so. But I've never seen the market go all the way into the end of any triangle and hit the APEX as most of the time a breakout one direction or the other happens well before that. Anyway, nothing more to say here. Just more chop as election fraud continues to unfold. Have a blessed day.