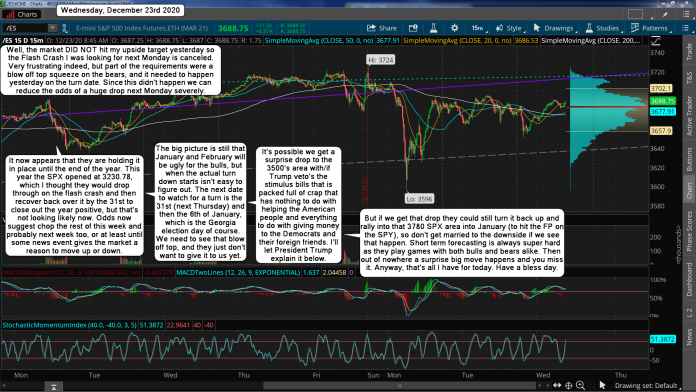 Well, the market DID NOT hit my upside target yesterday so the Flash Crash I was looking for next Monday is canceled. Very frustrating indeed, but part of the requirements were a blow off top squeeze on the bears, and it needed to happen yesterday on the turn date. Since this didn't happen we can reduce the odds of a huge drop next Monday severely.

It now appears that they are holding it in place until the end of the year. This year the SPX opened at 3230.78, which I thought they would drop through on the flash crash and then recover back over it by the 31st to close out the year positive, but that's not looking likely now. Odds now suggest chop the rest of this week and probably next week too, or at least until some news event gives the market a reason to move up or down.

The big picture is still that January and February will be ugly for the bulls, but when the actual turn down starts isn't easy to figure out. The next date to watch for a turn is the 31st (next Thursday) and then the 6th of January, which is the Georgia election day of course. We need to see that blow off top, and they just don't want to give it to us yet.

It's possible we get a surprise drop to the 3500's area with/if Trump veto's the stimulus bills that is packed full of crap that has nothing to do with helping the American people and everything to do with giving money to the Democrats and their foreign friends. I'll let President Trump explain it below.

But if we get that drop they could still turn it back up and rally into that 3780 SPX area into January (to hit the FP on the SPY), so don't get married to the downside if we see that happen. Short term forecasting is always super hard as they play games with both bulls and bears alike. Then out of nowhere a surprise big move happens and you miss it. Anyway, that's all I have for today. Have a bless day.