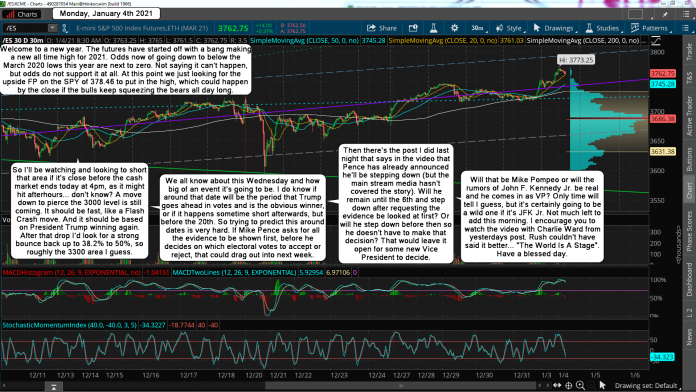 Welcome to a new year. The futures have started off with a bang making a new all time high for 2021. Odds now of going down to below the March 2020 lows this year are next to zero. Not saying it can't happen, but odds do not support it at all. At this point we just looking for the upside FP on the SPY of 378.46 to put in the high, which could happen by the close if the bulls keep squeezing the bears all day long.

So I'll be watching and looking to short that area if it's close before the cash market ends today at 4pm, as it might hit afterhours... don't know? A move down to pierce the 3000 level is still coming. It should be fast, like a Flash Crash move. And it should be based on President Trump winning again. After that drop I'd look for a strong bounce back up to 38.2% to 50%, so roughly the 3300 area I guess.

We all know about this Wednesday and how big of an event it's going to be. I do know if around that date will be the period that Trump goes ahead in votes and is the obvious winner, or if it happens sometime short afterwards, but before the 20th. So trying to predict this around dates is very hard. If Mike Pence asks for all the evidence to be shown first, before he decides on which electoral votes to accept or reject, that could drag out into next week.

Then there's the post I did last night that says in the video that Pence has already announced he'll be stepping down (but the main stream media hasn't covered the story). Will he remain until the 6th and step down after requesting the evidence be looked at first? Or will he step down before then so he doesn't have to make that decision? That would leave it open for some new Vice President to decide.

Will that be Mike Pompeo or will the rumors of John F. Kennedy Jr. be real and he comes in as VP? Only time will tell I guess, but it's certainly going to be a wild one if it's JFK Jr. Not much left to add this morning. I encourage you to watch the video with Charlie Ward from yesterdays post. Rush couldn't have said it better... "The World Is A Stage". Have a blessed day.