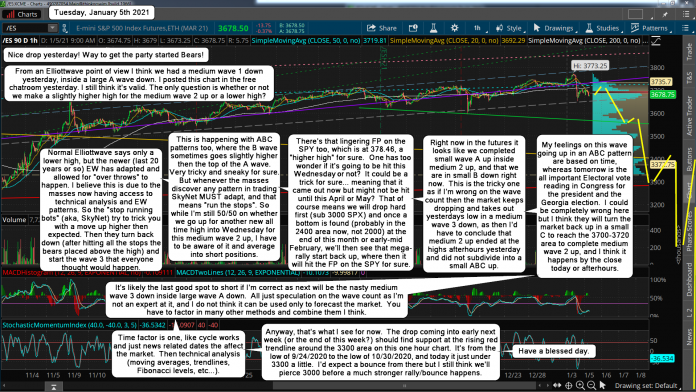 Nice drop yesterday! Way to get the party started Bears!

From an Elliottwave point of view I think we had a medium wave 1 down yesterday, inside a large A wave down. I posted this chart in the free chatroom yesterday. I still think it's valid. The only question is whether or not we make a slightly higher high for the medium wave 2 up or a lower high?

Normal Elliottwave says only a lower high, but the newer (last 20 years or so) EW has adapted and allowed for "over throws" to happen. I believe this is due to the masses now having access to technical analysis and EW patterns. So the "stop running bots" (aka, SkyNet) try to trick you with a move up higher then expected. Then they turn back down (after hitting all the stops the bears placed above the high) and start the wave 3 that everyone thought would happen.

This is happening with ABC patterns too, where the B wave sometimes goes slightly higher then the top of the A wave. Very tricky and sneaky for sure. But whenever the masses discover any pattern in trading SkyNet MUST adapt, and that means "run the stops". So while I'm still 50/50 on whether we go up for another new all time high into Wednesday for this medium wave 2 up, I have to be aware of it and average into short positions.

There's that lingering FP on the SPY too, which is at 378.46, a "higher high" for sure.  One has too wonder if it's going to be hit this Wednesday or not?  It could be a trick for sure... meaning that it came out now but might not be hit until this April or May?  That of course means we will drop hard first (sub 3000 SPX) and once a bottom is found (probably in the 2400 area now, not 2000) at the end of this month or early-mid February, we'll then see that mega-rally start back up, where then it will hit the FP on the SPY for sure.

Right now in the futures it looks like we completed small wave A up inside medium 2 up, and that we are in small B down right now.  This is the tricky one as if I'm wrong on the wave count then the market keeps dropping and takes out yesterdays low in a medium wave 3 down, as then I'd have to conclude that medium 2 up ended at the highs afterhours yesterday and did not subdivide into a small ABC up.

My feelings on this wave going up in an ABC pattern are based on time, whereas tomorrow is the all important Electoral vote reading in Congress for the president and the Georgia election.  I could be completely wrong here but I think they will turn the market back up in a small C to reach the 3700-3720 area to complete medium wave 2 up, and I think it happens by the close today or afterhours.

It's likely the last good spot to short if I'm correct as next will be the nasty medium wave 3 down inside large wave A down.  All just speculation on the wave count as I'm not an expert at it, and I do not think it can be used only to forecast the market.  You have to factor in many other methods and combine them I think.