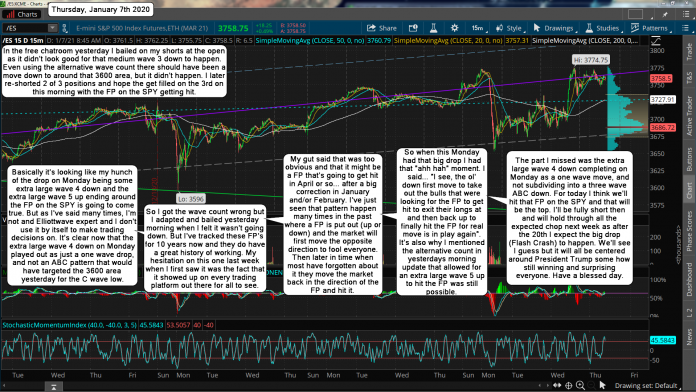 In the free chatroom yesterday I bailed on my shorts at the open as it didn't look good for that medium wave 3 down to happen. Even using the alternative wave count there should have been a move down to around that 3600 area, but it didn't happen. I later re-shorted 2 of 3 positions and hope the get filled on the 3rd on this morning with the FP on the SPY getting hit.

So I got the wave count wrong but I adapted and bailed yesterday morning when I felt it wasn't going down. But I've tracked these FP's for 10 years now and they do have a great history of working. My hesitation on this one last week when I first saw it was the fact that it showed up on every trading platform out there for all to see.

My gut said that was too obvious and that it might be a FP that's going to get hit in April or so... after a big correction in January and/or February. I've just seen that pattern happen many times in the past where a FP is put out (up or down) and the market will first move the opposite direction to fool everyone. Then later in time when most have forgotten about it they move the market back in the direction of the FP and hit it.

So when this Monday had that big drop I had that "ahh hah" moment. I said... "I see, the ol' down first move to take out the bulls that were looking for the FP to get hit to exit their longs at and then back up to finally hit the FP for real move is in play again". It's also why I mentioned the alternative count in yesterdays morning update that allowed for an extra large wave 5 up to hit the FP was still possible.

The part I missed was the extra large wave 4 down completing on Monday as a one wave move, and not subdividing into a three wave ABC down. For today I think we'll hit that FP on the SPY and that will be the top. I'll be fully short then and will hold through all the expected chop next week as after the 20th I expect the big drop (Flash Crash) to happen. We'll see I guess but it will all be centered around President Trump some how still winning and surprising everyone. Have a blessed day.