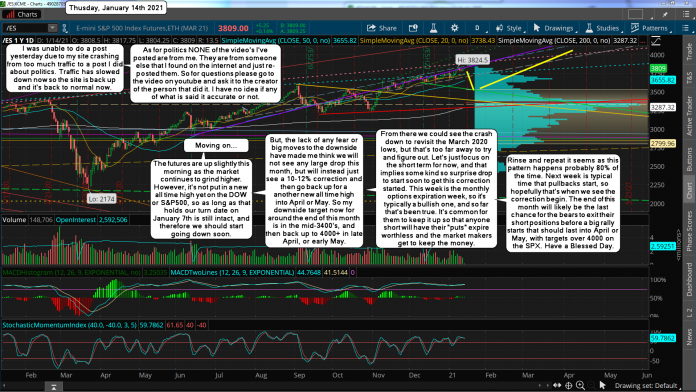 I was unable to do a post yesterday due to my site crashing from too much traffic to a post I did about politics. Traffic has slowed down now so the site is back up and it's back to normal now.

As for politics NONE of the video's I've posted are from me. They are from someone else that I found on the internet and just re-posted them. So for questions please go to the video on youtube and ask it to the creator of the person that did it. I have no idea if any of what is said it accurate or not.

The futures are up slightly this morning as the market continues to grind higher. However, it's not put in a new all time high yet on the DOW or S&P500, so as long as that holds our turn date on January 7th is still intact, and therefore we should start going down soon.

But, the lack of any fear or big moves to the downside have made me think we will not see any large drop this month, but will instead just see a 10-12% correction and then go back up for a another new all time high into April or May. So my downside target now for around the end of this month is in the mid-3400's, and then back up to 4000+ in late April, or early May.

From there we could see the crash down to revisit the March 2020 lows, but that's too far away to try and figure out. Let's just focus on the short term for now, and that implies some kind so surprise drop to start soon to get this correction started. This week is the monthly options expiration week, so it's typically a bullish one, and so far that's been true. It's common for them to keep it up so that anyone short will have their "puts" expire worthless and the market makers get to keep the money.

Rinse and repeat it seems as this pattern happens probably 80% of the time. Next week is typical time that pullbacks start, so hopefully that's when we see the correction begin. The end of this month will likely be the last chance for the bears to exit their short positions before a big rally starts that should last into April or May, with targets over 4000 on the SPX. Have a Blessed Day.