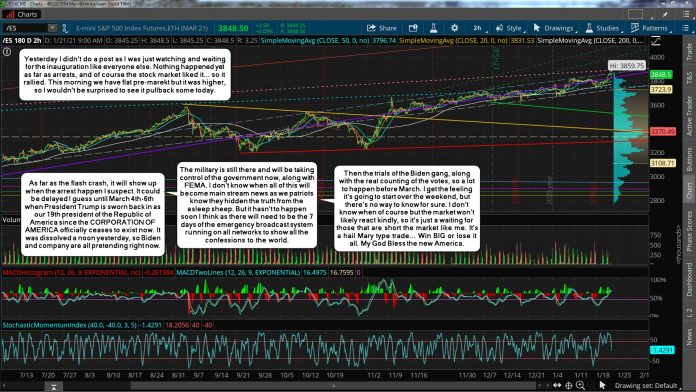 Yesterday I didn't do a post as I was just watching and waiting for the inauguration like everyone else. Nothing happened yet as far as arrests, and of course the stock market liked it... so it rallied. This morning we have flat pre-marekt but it was higher, so I wouldn't be surprised to see it pullback some today.

As far as the flash crash, it will show up when the arrest happen I suspect. It could be delayed I guess until March 4th-6th when President Trump is sworn back in as our 19th president of the Republic of America since the CORPORATION OF AMERICA officially ceases to exist now. It was dissolved a noon yesterday, so Biden and company are all pretending right now.

The military is still there and will be taking control of the government now, along with FEMA. I don't know when all of this will become main stream news as we patriots know they hidden the truth from the asleep sheep. But it hasn't to happen soon I think as there will need to be the 7 days of the emergency broadcast system running on all networks to show all the confessions to the world.

Then the trials of the Biden gang, along with the real counting of the votes, so a lot to happen before March. I get the feeling it's going to start over the weekend, but there's no way to know for sure. I don't know when of course but the market won't likely react kindly, so it's just a waiting for those that are short the market like me. It's a hail Mary type trade... Win BIG or lose it all. My God Bless the new America.