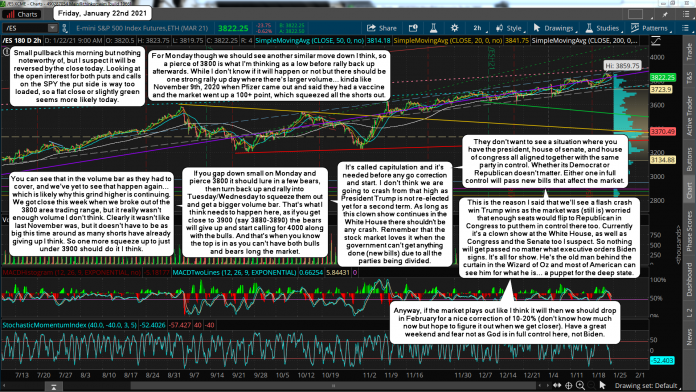 Small pullback this morning but nothing noteworthy of, but I suspect it will be reversed by the close today. Looking at the open interest for both puts and calls on the SPY the put side is way too loaded, so a flat close or slightly green seems more likely today.

For Monday though we should see another similar move down I think, so a pierce of 3800 is what I'm thinking as a low before rally back up afterwards. While I don't know if it will happen or not but there should be one strong rally up day where there's larger volume... kinda like November 9th, 2020 when Pfizer came out and said they had a vaccine and the market went up a 100+ point, which squeezed all the shorts out.

You can see that in the volume bar as they had to cover, and we've yet to see that happen again... which is likely why this grind higher is continuing. We got close this week when we broke out of the 3800 area trading range, but it really wasn't enough volume I don't think. Clearly it wasn't like last November was, but it doesn't have to be as big this time around as many shorts have already giving up I think. So one more squeeze up to just under 3900 should do it I think.

If you gap down small on Monday and pierce 3800 it should lure in a few bears, then turn back up and rally into Tuesday/Wednesday to squeeze them out and get a bigger volume bar. That's what I think needs to happen here, as if you get close to 3900 (say 3880-3890) the bears will give up and start calling for 4000 along with the bulls. And that's when you know the top is in as you can't have both bulls and bears long the market.

It's called capitulation and it's needed before any go correction and start. I don't think we are going to crash from that high as President Trump is not re-elected yet for a second term. As long as this clown show continues in the White House there shouldn't be any crash. Remember that the stock market loves it when the government can't get anything done (new bills) due to all the parties being divided.

They don't want to see a situation where you have the president, house of senate, and house of congress all aligned together with the same party in control. Whether its Democrat or Republican doesn't matter. Either one in full control will pass new bills that affect the market.

This is the reason I said that we'll see a flash crash win Trump wins as the market was (still is) worried that enough seats would flip to Republican in Congress to put them in control there too. Currently it's a clown show at the White House, as well as Congress and the Senate too I suspect. So nothing will get passed no matter what executive orders Biden signs. It's all for show. He's the old man behind the curtain in the Wizard of Oz and most of American can see him for what he is... a puppet for the deep state.

Anyway, if the market plays out like I think it will then we should drop in February for a nice correction of 10-20% (don't know how much now but hope to figure it out when we get closer). Have a great weekend and fear not as God is in full control here, not Biden.